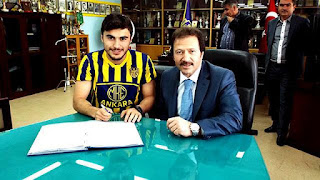 Ankaragucu today announced that Serkan Sirin has agreed a new 3 year deal with the club. The midfielder who has had a stop start career so far since breaking into the first team. The news will come as a major boost to the club with Serkan at the age of  22 being one of the clubs most experienced players.

After a loan spell at Mardinspor, Hakan Kutlu recalled the gifted player back to the first team. After making a couple of appearances in the Super Lig, Serkan established himself as a first team player this season in the PTT Lig. After a good start Serkan was dropped to the A2 team by Mustafa Kaplan due to the players attitude. Credit where due Serkan apologised and worked hard in training to regain his place in the starting line up.

There is no doubting the ability of Serkan who is a very good player technically but he has a lot to learn. On a lot of occasions he choses the wrong pass or holds onto the ball to long, he needs to work on his fitness and also find his best position. The will be a big season and it will be interesting to see if new coach Hayati Soldas can get the best out of his player.
By Nady - June 18, 2013