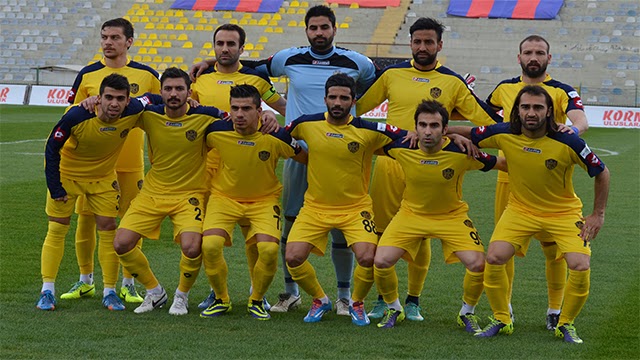 Ankaragucu all but waved goodbye to their Championship hopes today as they lost 3-2 at Altinordu thanks to an injury time winner by that man Gokhan Karadeniz. Its yet another game where Ankaragucu have come up against one of the top sides and failed to win. The defeat now leaves Ankaragucu in 3rd place 6 points behind leaders Altinordu.

Just last week their was an article that showed every team in the leagues wage budget. Ankaragucu were the highest while Altinordu were 2nd from bottom. I managed to see some of the game and from what i saw Altinordu looked head and shoulders above Ankaragucu. When you look at the likes of Erhan Guven, Serhat Aykuz, Selim Teber, Volkan Yilmaz, and Mehmet Cakir who all came from the Super Lig or PTT Lig its disappointing to see Ankaragucu sit 3rd in the league.

Its all good beating teams at the bottom and middle of the table who are really poor footballing sides, but any decent team Ankaragucu have came up against with the likes of Alanyaspor, Diyarbakir, Nazilli, Altinordu, Tepecikspor they have failed to beat. Is its a managerial problem ? Im not so sure, the players should be good enough to win these games no matter who the manager is.

The one thing i will say about Fuat Aykuz, is that yet again he failed to play Levent Kale and Umut Nayir together. They formed a formidable partnership in the first half of the season, but Fuat has broken that partnership up and instead is playing his own players. For me this is one of the problems for Ankaragucu. Teams done like playing 2 up front in modern football, but Levent works so hard and tracks back and does all the running, while Umut is the target man and it works.

Both teams went in at half time 0-0. They both had 1 really good chance each but Ramazan in the Altinordu goal made a fantastic save and at the other end Bayram made a good save from the Altinordu midfielder.

Altinordu took the lead on the 52nd minute through danger man Gokhan Karadeniz, a good cross into the box which the Ankaragucu defence failed to deal with saw Gokhan send the ball into the net. I said in my match preview that Gokhan was the man to watch, and at this level when you give the top scorer in the league that much space you will be punished.

Ankaragucu equalised through Emre Tasdemir but that was after they were reduced to 10 men with Mehmet Erdem red carded. Five minutes later the other man i noted as a danger Halil Tuna put Altinordu back in front.

It looked like both teams would share the points when Selim Teber equalised with 2 minutes remaining, but yet again the Ankaragucu defence couldn't hold on as that man Gokhan Karadeniz scored in injury time to give Altinordu a 3-2 win.

Disappointment all around for Ankaragucu, and they will now need to use the rest of the season to work on their weaknesses and make sure they are ready for the playoffs. Another season in Lig 2 would be unacceptable.