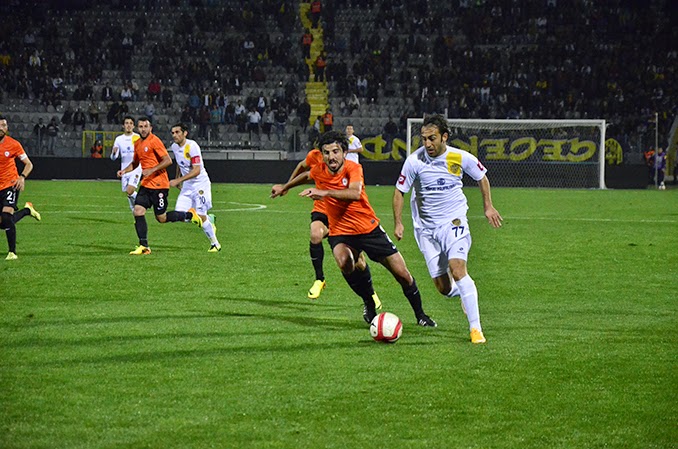 Today's post on Yurtspor has a simple metaphor for Ankaragücü fans and management. King Solomon reputedly settled a fight between two women who claimed to be the mother of a baby by saying they could have half each. The true mother of the child objected, saying that she would rather give it up than see her baby cut in half.

Before the match, 11 Ankaragücü fans were arrested in Yüksel Caddesi for fighting with leftists over their apparent support for the PKK. At the match, the management closed an entire tribune (Sol Kapalı) that it had a difference of opinion with and gave out free tickets to the police in order to fill it: the police at one stage even tried to chant in favour of the management and were shouted down. Gecekondu had hung their banner upside down in protest of the management. During the match, a few fans invaded the pitch to try to fight with Mehmet Yiğiner, and a few people from the dugout needed to be held back from fighting back. Later, all the tribunes in unison shouted insults at the management, which will almost certainly lead to a punishment for the club. Then, after the match, the fans went over to the other side of the stadium to fight the police, only to be teargassed and hit by rubber bullets.

It looks like both the fans and management are happier slicing up the baby than losing an argument over it.

I (Cider Kanka), Battle Damaged Kanka and Eski Kanka were in Maraton for the evening's game.

In footballing terms, Ankaragücü had a small yet consistent advantage over an extremely weak Polatlı Bugsaşspor team, and that advantage was largely that Polatlı usually fell to pieces as soon as they made any significant ground.

In the 19th minute Ankaragücü got their first cross into the box, but it was not difficult for the Polatlı keeper. It wasn't until the 30th minute when Ankaragücü looked dangerous again, with a well-placed corner shot about ten metres vertically into the air right in front of the net. In the 38th and 39th minutes Ankaragücü looked a little more confident, with a missed chance by Levent and an offside shot.


The first half (and most of the game): scrapping around in the centre with no killer instinct.

The second half started slowly: in the 50th minute, Umut got in front of the goal but sent the ball into the clouds rather than the net. In the 61st, Ankaragücü got their second best chance of the game: a ball came through, was shot at the keeper, saved but bounced over to number 16, who had a beautifully lined up shot a few metres from the goal. But even this went over.

In the 75th minute, Ankaragücü's saving grace arrived. Umut outpaced the defenders in a sudden counterattack away from the box, and kept it up until he got close enough to slot it comfortably behind the keeper. Although there was 9 minutes injury time (!) Polatlı never had the midfield strength to employ much more than a shoot-and-hope strategy from set pieces. A few minutes before the match ended, some wag outside the stadium set off a miniature fireworks display in celebration.

Today's match was a win that felt like a loss. Relations between management and fans are at such a low point that rather than reacting with joy at the scoring of a goal, fans reacted by calling on the management to resign and yelling insults at them. Let's hope that both tribune leaders and Mehmet Yiğiner find a way to swallow their pride and make peace for the good of their baby.
By John A - October 13, 2014