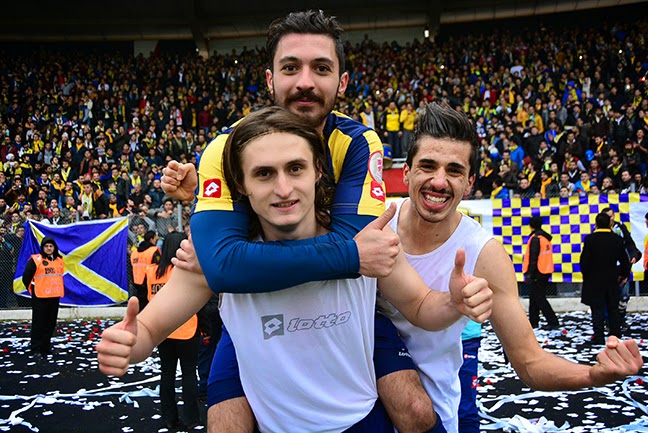 Despite the Lion’s share of possession today, it took Ankaragucu until the last 15 minutes of the match to seal a win which moved them well away from the relegation zone and into mid-table safety.    Well, at least for now !   So, a repeat of this performance today must be sustained for the remainder of the season to lay the foundation for a promotion push next season.

The kankas and kankie, Battle Damaged Kanka Damon, Cider Kanka John, Tev Kankie, The Tim Kanka Tony and yours truly, arrived to a carnival atmosphere with Gecikondu and Maraton full, and the other tribunes almost full.   The noise factor was ..... loud ! 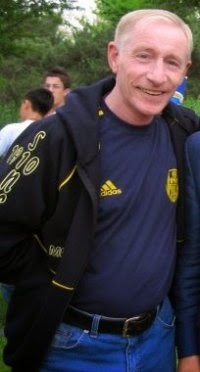 Only about 50 Altay supporters were in the away end, and as they are regarded as the ‘Gencler of Izmir’, they didn’t make a ‘squeak’ throughout the match.    Well, lets’ face it, they didn’t have much to sing about !

The Ankaragucu players came out with flowers (St Valentines Day !!) and proceeded to throw them to the supporters in the four areas of the Stadium.    This was followed by Gecikondu releasing blue and yellow balloons and Maraton displaying a cascade of confetti !

The first action of the match was almost an early goal from Teoman, but his on target shot was well saved by the Altay keeper.    An even better effort was made 7 minutes later on the 12th  minute mark when Levent volleyed a great goalbound shot just past the post with the keeper helpless.

Into the 16th minute and ......... yessssss ....... all the tribunes remembered how to sing the ‘Bursaspor Song’ which has been missing in recent matches !

It was still all Ankaragucu and in the 18th minute, Teoman was put through on the left. He tried to curl the ball around the keeper but he got a finger to it and it was cleared.

Approaching half time and the best chance of the match fell to Teoman again.   From a throw-in on the left, the ball was back headed to the unmarked Teoman who was only 3 or 4 yards out and he hooked the ball straight at the keeper when the easy option was to right or left.   A terrible miss which will haunt him tonight in his sleep !!!

5 minutes into the 2nd half and an important turning point in the match when a foul was commited by an Altay defender on the edge of the box.    Out comes a yellow, followed by a RED card and Altay was down to 10 men.

At this point of the match we were surprised by the late arrival of Kaleci Kanka Tansu – great to see this ‘olde boy’ back in the mix !!!

For the next few minutes, we had an Altay Surge.    However, Ankaragucu’s goalkeeper, Ihsan, was in fine form and made two crucial saves to deny Altay in what would have been a travesty of justice.

Ankaragucu regained the initiative and broke the deadlock on the 73rd minute mark.   From an Ankaragucu attack on the right, the ball was crossed to the far post where Hasan met it and sent in a screamer off the under-side of the crossbar !!      Relief all round and ............ high fives ......... and let’s break into song ............ Aaaaaankaaarrrraaagoooojooooo !!!

We were still celebrating 3 minutes later when the 2nd goal went in.    A free kick to Ankaragucu on the right just outside the box which Hasan sent into the space which had been left on the right.   With everyone expecting the free kick to be sent over to the back post (including the goalkeeper), Hasan astutely saw the space and the keeper didn’t have time to scramble across to save !     I had a feeling of deja vu about this goal from last season, or was it earlier this season !!    Brilliant !

All credit to the gallant 10 men who kept plugging away, and in all fairness to them, they belie their lowly position in the league.   They put up a great fight and never gave up till the final whistle.

Back to the Chopin Bar to celebrate and drink some yummy coooool Effffesssssss.

Next weekend Ankaragucu will be away to Tepecik.    Another performance like this and we can look forward to that match with more confidence than we had earlier in the season.

Well done today Ankaragucu, and ........ well done to the supporters for turning out in strength.    Today must have been close to a record attendance for a 2nd League match ! 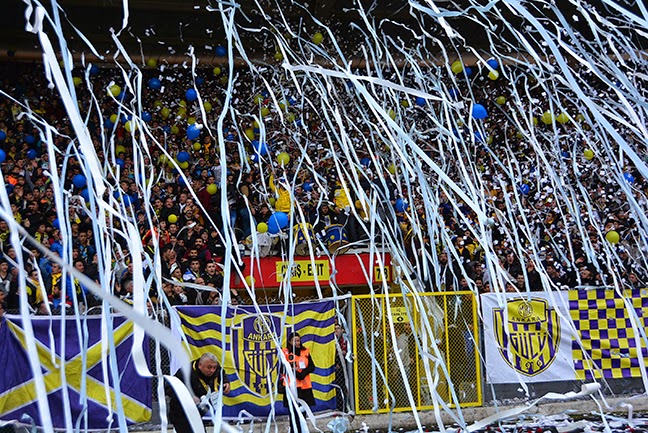