Ankaragücü fans were always going to give Diyarbakırspor fans(1) a hard time. Our ranks include a fair number of nationalists, who lead the chanting of "Şehit ölmez, vatan bölünmez" ("A martyr cannot die, the nation cannot be divided") after the national anthem is sung every game. It is also a footballing tradition in Turkey to wind up every team based on the perceived characteristics of the region it came from. As outsiders, we couldn't tell whether the pointed jibes at our opponents from this Kurdish-majority city breached the subtle distinction into racism. I suspect it would have been best to ask the away fans themselves, were they not so eager to escape after the match. 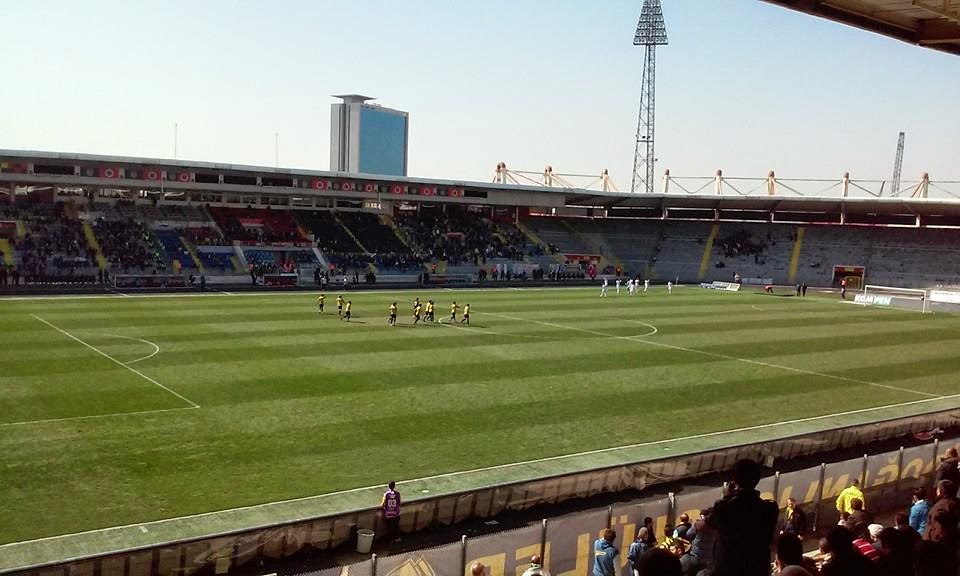 Nevertheless, the two sets of fans have no bad history, and there seemed to be more angst on the pitch than off. Ankaragücü's extreme offensive tactics of the past few months met with a stone wall in the form of Diyarbakır's extreme defensive tactics.

In the first half, the away team played with classic table football tactics - winning every contested ball, scooting it around and then waiting for Ankaragücü to open up enough of a gap in the midfield and defence to go straight through to a one-on-one with the keeper. Fortunately for our squad, though Diyarbakır may have been technically stronger, faster and better at dribbling and passing, they sent almost every single ball into row Z as soon as they saw the whites of Gökhan's eyes. All but one, sadly. In the 16th minute, a lone Diyarbakır player managed a beautiful run straight through the Ankaragücü attack, midfield and defence, and placed a perfect ball into the far corner of the net from the left-hand side.

In the second half of the match, Diyarbakır switched their tactics to put most of their team standing in the box simply deflecting endless Ankaragücü corners. I doubt they troubled our goalkeeper a single time in the entire half. Their unwillingness to move from a solid defensive position meant lots of opportunities for Ankaragücü - maybe twenty or more shots on goal, of which just one sneaked in. In the 89th minute, Aytaç met a corner kick with a strong shot that sailed into the roof of the net.(2)

Ankaragücü will probably be pleased to have got one back and surprised to have been allowed so many attempts. Not only were we up against a strong Diyarbakır team, but a lot of the regular players were out of position, and so we didn't look as good as we have done in previous weeks.


1. Who tend to prefer calling their club Amedspor after the alternate Kurdish name for the city, from the Assyrian Amida, though this usage has been officially rejected by the Turkish Football Federation.
2. I am reliably informed that this is what happened: around fifteen seconds before, the Maraton tribune suddenly started running around and there was talk of a stabbing attempt, so I missed the goal.
By John A - March 09, 2015