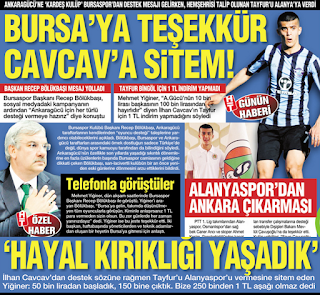 Ankaragucu continue to add to their squad with players who have agreed deals in principle depending on the removal of the transfer ban. It now looks likely the club will be successful in removing the ban on a temporary basis.

Those claims were boosted by the news that tribune group Anti X and their leader Hakan Toka announcing that they will return to the club. The Anti X group are close to Melih Gokcek and reports are surfacing on social media that their return is a significant clue that Gokcek is already helping the club now.

Ilhan Cavcav has went back on his word of loaning Tayfur Bingol and Atabey Cicek to the club by allowing them to move to other clubs. While the president of Bursaspor has announced that Ankaragucu can take some of their reserve players on loan.

Former Genclerbirligi player Omer Bozan could also win a contract with Ankargucu as he is the latest player to be linked with a move to the club.

One player on his way out of the club is highly rated midfielder Batuhan Gulcan who has agreed a 2 year contract with Besiktas.
By Nady - August 15, 2015