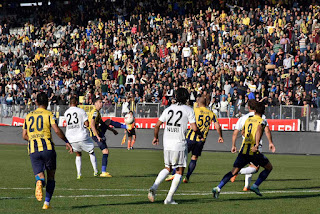 The two Ankara sides meet at the weekend in what is a must win match for both sides after disappointing results last week. Ankaragucu as we know lost at home to Manisaspor in the top of the table clash, while Ankara Demirspor lost to another Ankara side Keciorengucu.

After last weekends disappointing result with Manisaspor in front of a bumper crowd of 17,000 fans at the 19 Mayis stadium the fans vented their frustrations at the performances of Mehmet Yildiz who had only found the net twice in 13 games. Surprisingly Mehmet Yildiz who was also the clubs captain agreed to terminate his contract on Monday afternoon. As much as things didn't work out for Yildiz the fans and club would like to thank him for his efforts and leaving with a bit of dignity.

Kemal Kilic has also according to reports under pressure from the management team, and a defeat or draw against Ankara Demirspor will result in him losing his job. The Ankaragucu management team have made it clear they expect the team to win the league and won't tolerate these poor results.

Its unclear where Sundays match will be played as Ankara Demirspor only have a small capacity, the Ankaragucu management team have been in talks to try and get the game moved to the 19 Mayis Stadium, and the Cebeci stadium has also been mentioned to.

Ankaragucu reserve team played Ankara Demirspor in a friendly match yesterday afternoon and won 5-0. The goals came from Enes Kubat (2), Mustafa Ozturk, Timur Kosovali and Adem Saglam. The first team will be hoping for a similar result at the weekend although I'm sure the fans will just settle for the 3 points.

Kemal Kilic now has a headache as he decides who will play as the main striker in the team. Emrah Bozkurt has shown a bit of quality on occasions this season and good news for the club is the return of Mustafa Ozturk who is an attacking wide player with a bit of much needed pace. Timur Kosovali has shown in the past that he has a very impressive goalscoring record at this level, he needs a run of games to show that he can be the man to fire Ankaragucu into the PTT Lig. Enes Kubat can also be a big player for the club if he can get back to full fitness.

Ankara Demirspor have struggled of late after a great start to the season, they haven't won in their last 6 games, losing 4 of those games in the process. There are no easy games in this division, but make no mistake this is a match Ankaragucu should be winning quite comfortably.

It will be interesting to see how the team lines up, if i was in charge i would go with the following and take the game to Ankara Demirspor

Mustafa Ozturk won't be fit enough to play the full 90 minutes otherwise i wold have started with him, the likes of Enes Kubat, Hasan Kaya and Omer Bozan would also be in contention for a place in the starting line up.

Hopefully once we find out where the game will be played, the Kanka group can take in the match and cheer Ankaragucu onto victory.
By Nady - November 25, 2015