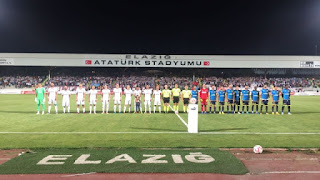 Ankaragucu sit 2nd from bottom with only 2 points from their opening 3 PTT Lig games after a disappointing 2-0 defeat at Elazigspor last night. Pressure is now mounting on Ismail Kartal and some of the first team players due to the nature of the defeat and how bad the team played.

Ismail Kartal much to the anger of the Ankaragucu fans dropped Kenan Ozer for Lanre Kehinde who made his debut while Ilhan Parlak still found his place in the team. He then decided to play Ilhan out wide, a position that needs pace and someone who can beat their man, both of which Ilhan cant do. Emre Koyuncu also came in for the injured Korcan Celikay. Leaving Altay Bayindir on the bench is a mistake, the youngster is one of the most highly rated Goalkeepers in Turkey and if Ankaragucu want to keep him, he cant be 3rd choice.

When a team wins promotion it always makes sense to build the team around their key players from that season. Instead Ismail let Muhammed Gonulacar, Omer Bozan, Cenk Kaplan, Alihan Kubalas, Muharrem Ozan and Serkan Balci leave. If you are going to let those key players leave then their replacements must be of a higher standard.

Instead based on the first couple of games only Anton Putsila and Cheikhou Dieng look to be the next level up. Yusuf Abdioglu in defence was all over the place last night and Mehmet Sak was the same. You just have to look at the Ankaragucu bench to see the amount of new players who are making no contribution while picking up a salary.

The good news is there is enough time to turn things around with only 3 games gone, but Ismail Kartal isnt the man to take this club forward. Its not an opinion based on 3 games, just ask Gaziantepspor and Fenerbahce fans what the think.

It took only 30 seconds for Elazigspor to create the first chance. A long ball over the top while Yusuf was caught sleeping let the Elazig forward in on goal but Emre made a good save.

On the 4th minute Putsila fired a 30 yard shot on goal but it went wide of the post.Then came the big moment of the game 10 minutes later. Lanre Kehinde making his debut against his former club got into a tussle for the ball, he then got up off the ground and proceeded to headbutt the Elazig defender in the face. An instant Red card and he has already received the backlash from Ankaragucu fans on social media. It will be interesting to see how the club deals with this selfish individual.

It took only 10 minutes after that for Elazig to take the lead. A corner to the back post was flight on for Mertan who again was unmarked to head the ball into the net to make it 1-0. How can a team at this level leave a man unmarked at a corner???

Ten minutes later it was almost 2 as Welliton outpaced Yusuf but again Emre made a good save. The score remained that way for the rest of the first half.

Jeffrey Sarpong came on in the 2nd half for Elazigspor and made an instant impact. Firstly he rounded Emre before hitting the side netting. He went 1 better minutes later though when Welliton went past Mehmet Sak who again was caught napping and crossed the ball to the back post for a Sarpong tap in to make it 2-0.

Sarpong and Alpastan both had long range efforts for Elazigspor while Ilhan and Kenan had chances for Ankaragucu at the other end.

Full time 2-0 Elazigspor and overall a horrible performance from Ankaragucu. Awful defending, hopeless attacking play and lack of discipline. The team now have a break with the International games coming up and will need to reflect on the last 3 games. Anything but a win in the next match over Balikseir and Ismail will be gone.
By Nady - August 28, 2017