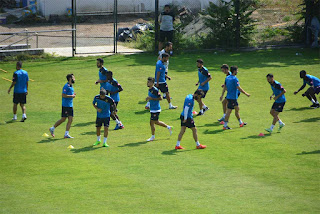 Ankaragucu return to action after the International break with a home tie against Balikesirspor at the 19 Mayis Stadium in Ankara. The team will be looking for their first win of the season and have much work to do after their disappointing performance at Elazigspor.

Ismail Kartal has 6 new players to chose from with Lukasz Szukala, Tonia Tisdell, Umut Nayir and Santiago Mele all signing from Osmanlispor, while Abdulkadir Kayali signed from Gaziantepspor and returns to the club he started his career with. Doka Mudureira also signs from Basaksehir.

There are no excuses for the manager or team anymore as the club have been backed financially whether we like it or not from Gokcek and some Ankara businessmen. The team on paper is equipped to challenge for the title and minimum target should be the playoffs.

The worrying thing for Ankaragucu fans is if Ismail Kartal is the right man for the job. He needs to be given time and he has all the tools to help him have a succesfull season, but the worry is that some of the players he brought in at the start of the season such as Alaaddin Okumus and Sercan Kaya have already been let go, while he has broke up the whole winning squad from last season.

You can look at it both ways, its either going to be a success or disaster. The club have spent a lot of money this season on building a whole new squad. If we win promotion to the Super Lig it will bring in more revenue and will have been all worth it. The worry is that the club dont win promotion and end up in more financial debt which again will put the clubs future in doubt.

The club have also announced today that they have released Ferhat Culcuoglu who was instrumental in the club winning the league last season. His hard work in midfield and leadership will be missed and we would like to wish him all the best in his future.

Balikesirspor have started the season with a with a draw, loss and win and will be no pushovers in Ankara tomorrow. They have also strengthened their squad over the transfer window adding Ismail Assati, Steve Belek and Mahtma Osumanu. I watched their match with Erzerumspor who beat them 4-3 in week 2 and their defence is an area of weakness that Ankaragucu can exploit.

The Kanka group will be attending the match in the usual place, anyone wanting to join them contact Jim for full details.
By Nady - September 08, 2017