Well, well, well. Gencler looked good today. Not brilliant but much more like a team. Still heaps of work but our new coach Mesut Bakkal (it is his third stint as Genclerbirligi coach) seems to be getting the Players to gel.

Autumn has arrived. Temperature in the mid 20s, lovely sun... ahhh. I love Ankara and I love the Alerta Pub where Spine and me bumped into a Alex, Andy and a mate of their who were down their to watch Tottenham beat up West Ham. James showed up a bit later and all was good. In the end though only James and I went off to the stadium, the rest happilly ordering another beer. 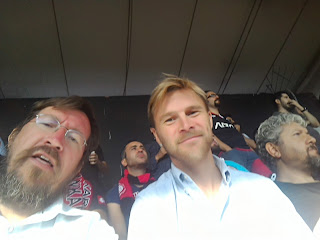 "Yonetim Istifa, yonetim istifa" was the first call of the day from all of the fans in Maraton. Gencler have had their worst start to a season in history. History! The fans weren't happy.

It didn't take long though for the supporters groups to get behind the team.

There is no way in the world you would say that tody's performance was brilliant... but it was solid. Just looking at the way the game was being played made me think that Basaksehir had the better players but we seemed to be working more as a team. We had our chances but couldn't nail them. basaksehir had fewer chances... but better ones.

It was still 0-0 in the 75th and all seemed a bit dull and then Basaksehir started to dominate. It was a good 10-15 minutes of full pressure and total possession. Even so they didn't get too many real chances.

And then came the glory.

Just as the announcer was announcing how many minutes were left Scekic sent a lovely through ball which Skuletic manageed to only just get a toe to and it bounced into the goal. Celebrations!

No one knew how many minutes had been added and so it seemed forever until the ref finally blew it up.

The Gencler players collapsed, some kissed the turf. They then came over to the fans to celebrate. This was a big win for these guys. A lot was riding on it...

First win of the season.