ANKARAGUCU POWER THEIR WAY 5 POINTS CLEAR AT THE TOP OF THE LEAGUE ! 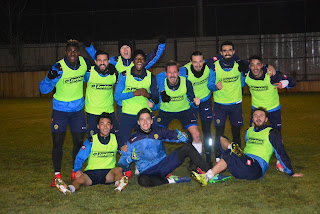 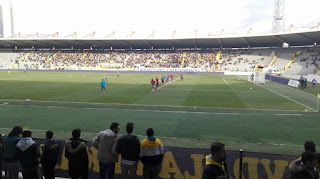 Then Club Chairman, Mehmet Yigner, came out of Protokol with his entourage for a walk down to Gecikondu and proceeded to go in there and mix with the Gecikondu boyz for the first half.   Amazing !     We hope to be able to put a video of this up soon in this position.

Also time for the tribunes to call-out popular olde boy, Fatih Tekke, the present Manisa Coach, for a round of applause.   As I said, Ankaragucu supporters have long memories ! 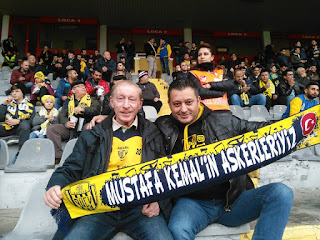 The new slogan for Ankaragucu and a must-have scarf for all supporters -  Mustaf Kemal Ataturk's Army !!!!    btw, nice looking chick on securtiy duty behind Harun !!!!

Umut was back in the starting line-up with Kehinde dropping to the bench, and although he couldn’t get his name on the score sheet, he worked his bottom off up front leading the line.

It took 10 in for the first goal chance when Ilhan almost got on the end of a Kenan cross.   Then, 4 minutes later at the other end it was a Manisa effort which was headed just past by Meye.

Into the 20th minute and an uncharacteristic sloppy pass by Erdem resulted in a foul and a Manisa free kick just outside the box.   Korcan to the rescue with a great save from Sevgi’s goal bound effort.

Perhaps that was the wake-up call which Ankaragucu needed and from this point it was all-out Ankaragucu attack.

In the 28th minute Umut almost connected with a cross from the right, but it was inches too high and the ball flew off the top of his head and out.   Two minutes later Kenan skied the ball over, then Umut headed over, and Kenan had another effort saved.

However, the pressure finally reaped reward 5 minutes before the half time whistle when Erdem flighted a corner to the back post for Ilhan to head in.

Putsila had an outstanding match in midfield – he just oozes class – and he almost made it 2 before the whistle with a great shot on the turn but it was well saved.

Ankaragucu started the 2nd half as they had ended the 1st, ie, in full-on attacking mode, and it only took 3 minutes for the 2nd goal to arrive.   It resulted from a mix-up in the Manisa defence which allowed the ball to be sent from inside the box on the right to the unmarked Ilhan lurking on the left and he made no mistake with a screamer of a shot with the goalkeeper static.

The match then entered a scrappy period with lots of niggling fouls.   Also, perhaps Ankaragucu took their feet off the gas thinking that the match was won ?!   However, Manisa had other ideas and they began to put the Ankaragucu defence under pressure with breakaways and they always looked likely to score, and if I’m honest, they were unlucky not to do so, but for some poor finishing.

Putsila and Kenan had a great passing movement but Kenan’s final shot was well saved.   Shortly after, Kenan left the field to well deserved loud applause and was replaced by Doka.

With 15 minutes to go, and with Ankaragucu still 2-0 up came the customary Mexican Wave, however, that was short-lived when Manisa silenced the fans with 2 efforts within 2 minutes.   Firstly a sloppy back-pass was intercepted, but the attacker’s effort was saved by Korcan.   Secondly, another Manisa attacker had a clear sight of goal with only Korcan to beat but he unbelievably skied it over from close range.

That was probably another wake-up call which gave Ankaragucu the impetus to go into attack-mode again, and Doka almost cored the 3rd as we headed into time added on.   He and Dieng combined well, however, his goal bound shot was well saved.

Then deep into time added on came the nail into Manisa’s coffin !   Captain Courageous Sedat received a pass on the left and he took the ball into the box with defenders backing off expecting a cross.   However, he let fly with an angled shot which crept in at the right post and off he ran to Gecikondu to celebrate !

A perfect way to end a match !!

So, it was off to The Bira Park to celebrate and meet-up with a new kanka, Miguel, from Portugal.   Hopefully he will organise his Passolig ticket soon and join us in the 2nd half of the season.   We were also joined by another new kanka, Gecikondu Hooligan Kanka Murat !!

Next Saturday is the last match before the Winter Break when Ankaragucu travel to Adana to play Demirspor.   Win, lose or draw, Ankaragucu sit on top of the league at the half way point which is a great achievement and all credit to the Coach and players for showing the consistency necessary to maintain top spot in this difficult and competitive league.

Watch this space for the venue for watching the match next Saturday KO 3.30pm.