ANKARAGUCU DISCOVER THAT HOROZ ARE NOT CHICKENS !!! 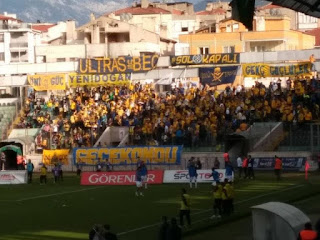 The Away Section in Denizi yesterday prior to kick-off.    In fine voice as usual !!

Talking of meek and mild animals, Ankaragucu started the match like lambs (bah .. bah .. bah) and allowed Denizli to dictate the flow of the match from the off !

This was not the way I expected the team sitting 2nd top of the league to play against a team in 3rd bottom position.   So, it was all doom and gloom from the off till the end for Battle Damaged Kanka Damon and I watching in The Kara Simit Cafe. 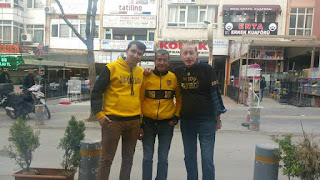 The writing was on the wall from the 10th minute when Denizli was awarded a penalty when Sedat brought down an attacker just inside the box.   As an ex-Class 1 referee, I can understand the referee’s decision and in all fairness he had no hesitation in pointing to the spot.   Sedat put his leg against the attacker’s thigh and there was only one way he would go and that was ........ to the ground.

It could be argued that he made a meal of it, but, as I said, the referee obviously saw it as a blatant foul.   Korcan almost saved it and managed a hand to it, but it went in and so it was tails-up for Denizli as they continued to take the game to Ankaragucu.

A few minutes later came Ankaragucu’s only serious attempt in the first half when Kenan was put through, but he shot straight at the goalkeeper.

From then, it was scrappy play with lots of niggling fouls and bad temper from both sides.

Then, fast forward to the 41st minute and an unbelievable decision from our Coach Ismail Bey.   The one player in midfield who was showing any enterprise and endeavour was taken off !!     Arrrrrrrgh !!!    It wasn’t as if Mbamba was injured or showing any discomfort, and as he walked off his face spoke a thousand words !    Putsila replaced him, but it could be argued that both of them should have started !!

4 minutes later came the controversial and contentious decision of the match when the referee gave Alihan a 2nd yellow and therefore a red card.   It was an immediate decision with right hand to right pocket for yellow and followed immediately by left hand to left pocket for red !   Alihan had been on the receiving end of some vicious tackles and elbowing to the face during the match but I don’t think his tackle on the Denizli attacker was malicious.   Alihan made the tackle near the left touchline, so there was no imminent danger to Korcan.   Alihan won the ball, but the referee indicated that he had stamped on the attacker’s foot in doing so.   Okay, the referee was up with play, but this was a harsh decision and one which changed the face of the match !

It took about 10 minutes or so before the match could re-start with chaos on the touchline and in the VIP Section.   The cameras didn’t pan to the VIP Section, but is is reported by our Maniac Kanka Harun, who was in the vicinity, that our Chairman, Mehmet Yigner, became embroiled in an argument with the Denizli management and blows were exchanged !   A punishment could be on the cards for this me thinks !!!

Back on the touchline and heated words were  directed to the referee, and substitute, Mehmet Sak, obviously overstepped the mark and was subsequently shown a yellow card.   Order was eventually restored, but from the re-start Denizli broke out on the left.   The ball was crossed into the box and an incoming unmarked Denizli attacker looped a header over the exposed Korcan.   Time of goal ....... 45 plus 17 – perhaps one for the Guinness Book of Records ?!

Lots of mumblings of discontent in the Kara Simit with the bleak outlook of starting the 2nd half 2-0 down and playing with 10 men against a fired-up Denizli who at that stage were flattered by the scoreline !

Both teams had so far served-up a bad tempered and niggling footie match which could quite easily be described as 3rd Division footie !!!

Into the 2nd half then and 4 minutes in Ankaragucu gifted Denizli and ‘offside goal’ after some insane passing in defence direct to a Denizli attacker.   Denizli was cutting the Ankaragucu defence to pieces and Alihans’s absence was beginning to cause panic stations !   Korcan came to the rescue soon after with a good save after excellent approach play from Denizli.

However, the 3rd goal came 10 minutes later, and to be honest, it came as no surprise.   Denizli broke away from a goalkeeper clearance and Ankaragucu’s defence was posted missing at the speed of the break.   The ball was cut back from the right to an unmarked striker who angled his shot across Korcan and Denizli were giving us a demonstration on how to score on the break.

As I said on Whatsap yesterday, Parlak was posted Absent Without Leave during the 1st half, but he revealed himself twice in the 2nd half to remind us that he was still on the pitch !!   Firstly, he had a headed attempt midway through the 2nd half which was parried by the goalkeeper.   He attempted a shot from the rebound but it struck a defender’s arm and went out for a corner.   The ball to arm was on the referee’s blindside, therefore no penalty was given !!

Secondly, Parlak had a goalbound effort well saved by the Denizli keeper on the 71st minute mark, and that was the extent of his match contribution !!

5 minutes later and Umut had a great chance when he was picked-out with a cross, but with only the goalkeeper to beat, he sent a weak shot straight at him

10 minutes to go, came the best chance of the match.   Putsila weaved his way through about 3 tackles and sent a great ball to Kenan who copied Umut’s previous attempt and shot weakly at the goalkeeper.   I hesitate to criticise Kenan who worked tirelessly throughout !

Note for Ismail Bey .........please practice this on the Training Ground this week !     When you are one on one against a goalkeeper, you ‘dummy’ one way to commit him, take the ball around him, and then slot it into an empty net.   QED !!!

Deep into time added on and a consolation goal for Ankaragucu which it has to be said was a well constructed goal.   A cross from Putsila on the right and a bullet of a header from Umut high into the roof of the net.

In the final analysis, a well deserved 3 points for Denizli in their fight to avoid relegation, and I should add that I hope they don’t go down.

As for Ankaragucu, they need to change their match philosophy and start their remaining matches in the belief that they can WIN them.   I repeat (lost count of how many times I’ve said this on this blog)......... a footie match lasts for effin 90 plus minutes !!!!      Yesterday they shot themselves in the foot and I could hear the cheers and laughter from Rize and Umraniye all the way to Ankara !!!

Ismail Bey now has a major job on his hands to prepare them for next Saturday’s visit of Giresun, and more importantly, the ‘six pointer’ in Umraniye the following weekend !

It’s not too late to turn the corner after yesterday’s hiccup.    Let’s do it Ankaragucu !!!