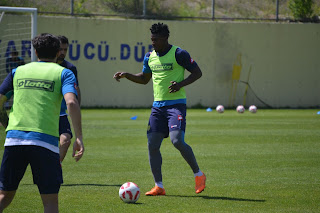 Only 2 games remaining as Ankaragucu seek their place back amongst Turkeys elite, with the club from the Capital in pole position ahead of promotion rivals Umraniyespor and Boluspor. Two wins will seal the deal for Ankaragucu after 6 years away from top flight football and they are in control of their own destiny. The two matches come against Manisaspor who sit 2nd bottom of the table losing their last 7 games and conceding 31 goals. The other comes against 4th bottom Adana Demirspor at home next weekend.

If someone had offered you to be in that position before the season started you would have bitten their hand off. This is Ankaragucu though and we all know how unpredictable they can be, letting you down when you get your hopes up, or winning against the odds.

Some credit must go to Ismail Kartal who had come under a lot of criticism since the start of the year, some of which was deserved due to awful performances and results. Since the Boluspor defeat, the team has won 5, drawn 1 and lost 1 of their last 7 games. Umraniyespor on the way have dropped points which Ankaragucu have managed to take advantage of and now sit 1 point above with 2 games remaining. Boluspor arent out of the race yet as they are only 3 points behind Ankaragucu.

Ankaragucu will travel to Manisa this Saturday knowing a victory will take them one big step closer to the Super Lig. Mehmet Yiginer has already stated they will build a team that will compete for a Top 5 place in the Super Lig if we win promotion.

Manisaspor as mentioned earlier are 2nd bottom and already relegated to Lig 1. Thea team is made up of mostly youth players as the club are in a bad way financially. There shouldn't be too much problems in this one for Ankargucu but as we have seen all to often in football, especially with Ankaragucu upsets can happen.

Slavko Perovic is the key player for Manisaspor and has had a respectable season scoring 8 goals despite all the problems Manisa have had.

Ankaragucu will again be without Anton Putsila who is suspended, and will likely again go with the same team that produced a fantastic 4-0 win over Gazisehir last weekend. Lanre Kehinde, Ilhan Parlak and Umut Nayir all impressed in attack, while Mbamba Kibong had his best performance in an Ankaragucu shirt. Mbamba has had a disappointing season due to injury which has prevented any real consistency, but he showed his key qualities last weekend and will be an important player again.

Another large contingent of Ankaragucu fans are expected for the trip to Manisa as a win for Ankaragucu could see them promoted this weekend if Bolu and Umraniyespor both drop points. Come on Ankaragucu lets get back to where we belong.
By Nady - April 25, 2018