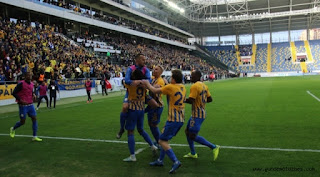 The new signings couldn’t quite do enough to earn Ankaragücü all 3 points in the relegation battle against Kasimpasa. There were some impressive debuts from Gerson Rodrigues and Saba Lobjanidze in particular but still a few places in the team in midfield and attack where the team lacked quality today.

Mustafa Resit Akcay gave 3 starting debuts with Rodrigues, Lukasik and Saba all making their first appearance in Sari Lacivert. There was also a surprise start for Oscar Scarione who failed to grab his chance in the game and will almost certainly drop out next week against Malatyaspor.

Kasimpasa started the brighter and took the lead after only 7 minutes in front of a near full Eryaman crowd. A brilliant cross from Haddadi on the left hand side was brilliantly headed past Korcan in the Ankaragücü goal to make it 1-0 to the visitors.

The Istanbul side doubled their lead minutes later but VAR correctly ruled it out for offside. Another great ball into the box headed by Thiam but Korcan made an outstanding save. Thiam then scored from the rebound but was offside.

Gerson Rodrigues sparked Ankaragücü into life and almost got them level as he cut inside his man in the box before firing his shot at goal but Ozturk made a good save.

Sedat then saw his long range effort go just over the bar as Ankaragücü kept the pressure on Kasimpasa.

Just before half time Ankaragücü nearly drew level after a brilliant move from Saba Lobjanidze and Dever Orgill but Saba saw his shot hit the post as he looked for that debut goal.

Into the second half and Saba hit the post again. A brilliant ball from Gerson Rodrigues and Saba hit the ball first time but his shot came back off the post. Dever Orgill was then on hand to pick up the lose ball and cut inside his man in the box and was brought down for a penalty after the referee consulted VAR. Up stepped Rodrigues who fired the ball into the top corner and make it 1-1.

Ricardo Quaresma had a late free kick brilliantly saved by Korcan before Ilhan at the other end had a great chance to win the game for Ankaragücü but he somehow fired his shot high and wide.

Full time ended in a 1-1 draw which is disappointing for Ankaragücü as these are the games you need to win. But there were some positive signs today and with Cebrail, Milos and Rivas all back next week the team will be stronger for the game against Yeni Malatyaspor.
By Nady - February 02, 2020