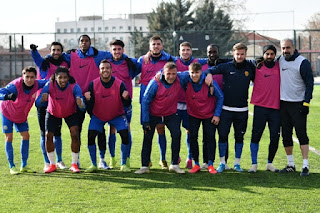 Eryaman Stadiums home section has sold out for Saturday nights game with Fenerbahce who are also expected to sell out their allocation. A huge game for both clubs win Ankaragücü fighting relegation while Fenerbahce are still in the mix for the Championship.

Ankaragücü will go into the match with confidence after picking 4 points up in their last 2 games and  will be hoping the home advantage and atmosphere can work in their favour. The 1-0 win at Yeni Malatyaspor has given Ankaragücü a lifeline in their fight for survival, but they will have to find the next level in performance of they are to take anything from the game on Saturday.

Ilhan Parlak and Oscar Scarione came in for a bit of criticism last week with their performances especially Ilhan on the ball. Konrad Michalak came on for Ilhan in the 2nd half and instantly changed the game with his speed and dribbling skills and it would be a surprise if he didn’t take the place of Ilhan in the team. Michal Pazdan could also return to the team after illness although Alihan played very well in his absence last week.

Daniel Lukasik was man of the match last weekend in Malatya with an excellent performance in the middle of the park. His work rate and energy drove Ankaragücü forward while being able to retain possession which has often been a problem for the team this season. Gerson Rodrigues has shown flashes of brilliance and then trying to hard to make everything look fancy, he can be a key player for the club but needs to concentrate on doing the basics first.

Fenerbahce won 2-1 in Istanbul earlier in the season, but the big talking point from the game was some of the decisions that went against Ankaragücü. Dever Orgill gave Ankaragücü the lead but Fenerbahce got back into the match through Zanka from a corner which should have been a goal kick to Ankaragücü. There were some other dodgy decisions that went Fenerbahce way that day too. The Istanbul side have been of late putting out statements on a weekly basis about decisions that are going against them, which has also resulted in Ankaragücü putting out a statement saying they don’t want to be disadvantaged by referees feeling under pressure to give Fenerbahce decisions.

Fenerbahce will be without Garry Rodrigues through injury but still have plenty of quality in the team including the brilliant Vedat Muriqi and Max Kruse who will be the main dangermen. If Ankaragücü can keep those two quiet they have a chance of taking something from the game.

Some news from off field this week. President Fatih Mert has lifted the 5% members quota and will now allow all Ankaragucu to be members of the club which is a historical day for the club. Also the debt has been reduced to around £32 Million pounds. At last we are seeing some transparency and it’s all thanks to having Ankaragücü fans running the club.

The Kanka group will all be in attendance at the game on Saturday and Jim will have his match report on Sunday. Saldir Ankaragücü!!!