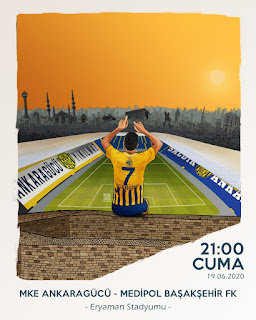 Ankaragücü are running out of time to save their place in the Turkish Super Lig, and with 7 games remaining they have another tough one tomorrow night at home against title contenders Basaksehir.

Ankaragücü player well last week at Gaziantep when you take into consideration it was the players first game in 12 weeks. That’s longer than a usual summer pre season and there were no friendly matches to keep the players fitness levels up.

The main frustration from the game, was again the inability to convert the many chances the team created. Dever Orgill again worked hard and played his part in the Scarione goal, but at no time looked like scoring. Saba Lobjanidze had a very quiet game, while Gerson showed flashes of brilliance, and then frustrated at other times.

The front 3 players mentioned will be key to Ankaragücü staying up and they have 7 games starting from tomorrow night to turn things around. Gelmin Rivas also comes back into the squad while the likes of Konrad Mikhalak and Ilhan Parlak are chapping at the managers door.

Oscar Scarione has had a tough time since joining the club 18 months ago having only managed a handful of games due to injuries and fitness. In the few games he has played, he has showed his quality with some important goals, and that was the case again at the weekend with another brilliant strike. If he can stay fit he will be another key player.

Ante Kulusic misses out due to suspension and his place will be taken by either Ricardo Faty or Fatih Tultak. Faty will likely get the nod as 19 year old Tultak has yet to make his debut. Alihan Kubalas for unknown reasons terminated his contract with the club weeks ago.

Basaksehir will come to Ankara looking to take all 3 points back to Istanbul as they sit joint top with Trabzonspor. They will be hoping to make it 3rd time lucky this year and finally win the Super
Lig title.

Key players will be Edin Visca, Irfan Kahveci and Daniel Aleksic who will provide the ammunition for in form strike force Demba Ba and Enzo Crivelli. Basaksehir have so many talented players but Visca in particular is arguably the best player in the Super Lig.

Ankaragücü will need to be at their best to take anything from this game and Basaksehir will need to have an off day. Let’s hope for a miracle as Ankaragücü badly need those 3 points.
By Nady - June 19, 2020