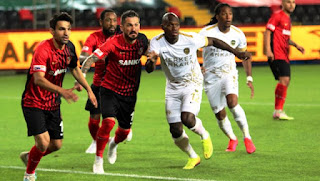 The Turkish Super Lig resumed this weekend, and it was the all too familiar unlucky story for Ankaragucu as they drew 1-1 at Gaziantep. Its difficult for all teams at the moment having last played 3 months ago to show their full potential and it showed at times with both sides which made for an exciting game for the neutral.

Mustafa Resit decided to go with Haruns favorite player Atilla at left back and move Pinto into midfield. There was also a starting place in the line up for Oscar Scarione which proved to be a good decision. No place in the squad for January signings Gelmin Rivas or Milos Stojanovic with Ricardo Faty taking up the final foreign place.

Rivas in particular is a surprise as Dever Orgill again failed to find the net making it only 4 goals from his 23 outings this season. Reports suggested Rivas was in a lot better shape since returning and was looking good in training. Ankaragucu are running out of time to stay in the Super Lig and it could be a wise decision to include him against Basaksehir next weekend.

Gaziantep started the brighter of the two teams and it was Muahmmet Demir who had the first chance of the game but he somehow headed over from just 5 yards out and it was a lucky escape for Ankaragucu.

Oscar Scarione went close for Ankaragucu from 30 yards but his shot was deflected just wide of the post, although the referee wrongly gave Gaziantep a goal kick.

The opening goal of the game came after 25 minutes when Kulusic clumsily brought Maxim down in the box and the referee awarded a penalty. Maxim stepped up himself and sent Freidrich the wrong way to make it 1-0 Gaziantep.

Shortly after Gaziantep had a chance to double their lead through Djilobodji but he missed a sitter from 2 yards as he headed wide of the post and another lucky escape for Ankaragucu.

From then on, Ankaragucu dominated the game. Gerson Rodrigues went past a couple of Gaziantep defenders but instead of showing a bit of composure with just Guvenc to beat in the Gaziantep goal, he blasted his shot which came back off the crossbar. An excellent run from the Luxembourg international, but he should have finished it.

Early in the second half Lukasik had a chance from the edge of the box but he shot just wide. Then minutes later came the goal, and what a goal it was. The ball found its way to Scarione on the edge of the box who shot into the top corner giving Guvenc no chance. A brilliant goal from the Argentinian.

Gerson then had a go from 25 yards but his swerving shot was palmed away by Guvenc and Ankaragucu were really piling the pressure on. Gerson and Scarione combined again with a lovely pass and go, Scarione only had the keeper to beat, but his shot was brilliantly saved.

Atilla Turan had a free kick saved by Guvenc before a crazy last 5 minutes where Ankaragucu should have taken the 3 points.

First up was Stelios Kitsiou, he brilliantly beat his man in the box and only had the keeper to beat but shot straight at him. Then minutes later a great counter attacking move found its way to Konrad Mikhalak but he also shot straight at Guvenc.

An overall good performance from Ankaragucu in their first match back but when you create so many open chances and only take 1 of them you fail to win football matches. Ankaragucu are now 2 points from safety but next up is on form Basaksehir next weekend at home. Lets pray for a miracle.
By Nady - June 15, 2020