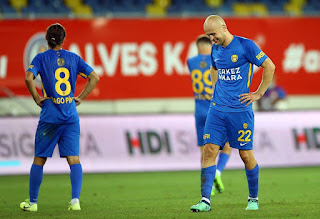 The inevitable relegation to Lig 1 was confirmed for Ankaragucu last night after a disappointing 1-0 home defeat against Antalyaspor. The club has now suffered 3 relegation's in the last 8 years and President Fatih Mert has an extremely difficult job on his hands due to the financial problems and threats of another transfer ban from Fifa.

Gelman Rivas was handed his first start for the club after Gerson Rodrigues had his contract terminated during the week, while Dever Orgill missed out due to suspension.

Before we discuss the match, i think its important to go back and look at the Gerson situation again. The Luxembourg international was dismissed from the team last weekend just before the Galatasaray match due to punching Ante Kulusic. The exact same scenario happened just a year earlier when Mostepha El Kabir was sent him, also before a Galatasaray match. Both players were key players for the club with Gerson arguably along with Kitsou the best player in the squad.

Now what Gerson done was wrong, and deserved punishment, but the players were asked by the clubs senior management if they were willing to forgive the player to allow him to play last nights match against Antalyaspor. The players refused and Gerson had his contract terminated. Ankaragucu had a number of opportunities last night but couldn't take any of them which is extremely disappointing especially after this decision.

On the other hand, Gerson is a player who clearly has talent and is said to be wanted by a number of Turkish Super Lig clubs including Besiktas. However his behavior has been questioned in the past at other clubs, and also with Ankaragucu. You just need to look at his Instagram and it paints a picture of someone who wants to be a film star instead of a footballer.

Ankaragucu didn't play that bad last night, but it was a reflection on how the rest of the season went. Plenty of effort and defended well, but poor in attack with no end product. The first chance of the game fell to Kitsiou who saw his header cleared off the line.

Oscar Scarione had long range effort saved by Kaplan just minutes later, before Rivas and Faty both missed chances to give Ankaragucu the lead. Antalyaspor rarely threatened in the first half, but had a great chance on the 35th minute but Balci blasted over.

Saba Lobjanidze again showed some nice skill and used his pace but when he gets into the final third his play is awful. Too many times he failed to find his man in the box, and then had a chance just before half time but dragged his shot wide.

The one player in this team you have to feel sorry for is Stelios Kitsiou. Again he put in a good performance but had nothing to show for it. He had a chance before half time after creating an opportunity for himself but his shot was deflected just wide.

Into the second half and the best chance of the game came when Thiago Pinto put in an excellent cross for Rivas who volleyed and connected well but his shot was straight at the Keeper Kaplan. He should have scored.

Dogukan and Adis Jahovic had chances for Antalyaspor but one went over the bar and Freidrich made a good save from the other. Ricardo Freidrich then made another excellent save from Fredi after a good counter attacking move from Antalyaspor.

Ilhan Parlak fires well over has been said far too often this season, and he wasted another great chance when he came on. This will hopefully be 1 of many players to move on from Ankaragucu in the summer.

Ricardo Faty had a horrendous last 10 minutes of the game. Firstly he had Freidrich to thank for bailing him out for an awful pass he made. And then a few minutes later he had the best chance of the game to give Ankaragucu the lead. From only 5 yards out and just the keeper to beat he shot straight at Kaplan and that was game over.

Antalyaspor went up the other end minutes later and took the lead through Adis Jahovic who made it 1-0 and gave the visitors all 3 points sending Ankaragucu down into Lig 1.

The end to a bad season for Ankaragucu, but it doesnt say a lot for the Turkish Super Lig when a club who had so many problems off the field, financially and a change of President, that it took until the 2nd last game for them to go down.

Ankaragucu signed 15 new players on the last day of deadline day in January. Only 4 of them started yesterday, Saba, Mikhalak, Lukasik and Rivas. It was also only Rivas first game. The recruitment hasn't been good enough, but when you are left with 1 day to sign new players this is the end result.

The club as usual went through 4-5 new managers in a season too, none of them good enough. This needs to stop and there needs to be some stability. Fatih Mert has to bring in a young manager with a good pedigree that knows the club. Hakan Kutlu and Hakan Keles have both been mentioned. They also need to use the Youth Academy which has been deserted over the last 5 years.

Bringing through young players both from Turkey and abroad and selling them on for profit is the only way the club can survive and see some stability again. Its going to be an interesting few months before the season starts. Lets hope Ankaragucu can bring in the new Manager and players early and dont leave it until the last couple of days again.
By Nady - July 20, 2020