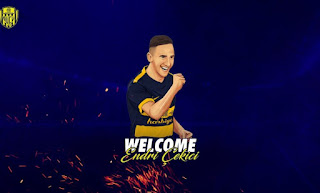 The Albanian playmaker finally completed his move to the club this afternoon and now completes the clubs transfer business. Cekici has been linked with a move to the club for the last 4-5 weeks but it looked like the move was dead until last week when rumours started to grow that the club see him as the final piece of the jigsaw.

The 23 year old who can play on either wing or just behind the striker has a good scoring record in the Slovenian League with Ljubliana where he has signed for 200,000 Euros. The Super Lig will be a step up in quality but Ankaragucu will be hoping he can contribute straight away and help the attack which has been largely missing for the first 3 games.

We welcome Endri to the club and hope he can be successful and earn his first cap in the Albanian National team.