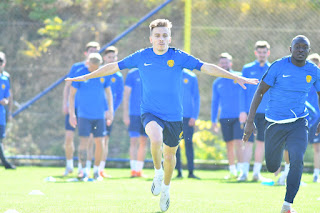 Ankaragucu find themselves rooted to the bottom of the Turkish Super Lig with 1 point from their opening 4 games but also have 2 games in hand as they have served their bye week, and last weeks game with Hatayspor was called off due to a Covid outbreak within the Hatay squad.

A trip to Istanbul awaits the team this weekend against Galatasaray and under normal circumstances this would be a difficult game, but one in which Ankaragucu could cause an upset with a fully fit squad. Unfortunately the team has had their own Covid outbreak in the squad this week with 7 players testing positive and now having to self isolate. I know the names of the players who have tested positive but the club haven't released this information yet so i will keep it private. All i can say is that its a huge blow as 3 of the players in particular are key players within the squad.

Alper Potuk will also miss the match through suspension after his red card against Rizespor in the last match. There could be an opportunity for youth players to make their debut for the club due to the lack of numbers in the squad.

Of the players who are available the likes of Assane Diouassi and Luka Adzic need to step up and prove their worth to the team. They have struggled with fitness and hopefully will have used the last 2 weeks to improve their sharpness.

Jonathan Bolingi will also come back into the squad after missing the last 2 games through injury. Bolingi gives the team a big boost as his physical presence and work rate has been missed in the last couple of games. Torgen Borven opened his account against Rizespor and will be hoping his team mates can create opportunities for him at the weekend.

Galatasaray sit in 3rd place with 10 points but despite the talent they have in the team the performances have been inconsistent. Defeats against Alanyaspor and Kasimpasa were followed up with a good 2-1 win at Erzerumspor last weekend. They were also knocked out of the Europa League by the worlds most successful club Rangers.

The Istanbul giants have quality players such as Falcao, Babel, Feghouli, Taylan, Emre Akbaba, Emre Kilinc but inconsistency has been a problem with a few of them who have come under criticism for the big salaries they are picking up. Younes Belhanda misses out due to testing positive for Covid, while Muslera is out injured.

The lack of pace in the Galatasaray team is where Ankaragucu can look to exploit. The likes of Saba and Adzic if they play can take advantage of that but need to have the final ball and decision making to make it count. Marcao and Luyindula are both very strong in the air but the right back and left back position is a weakness of Galatasaray. Also stopping Taylan from dictating the game is key for Ankaragucu and hopefully Fuat Capa has a plan in place.

Ankaragucu won 1-0 the last time the two sides played last season thanks to an Oscar Scarione penalty, while the away game in Istanbul finished 2-2 thanks to late goals from Kitsiou and Ilhan despite being down to ten men when Orgill was sent off. Ankaragucu would settle for any of those outcomes this weekend considering the circumstances.

Fuat Capa is under a bit of pressure to start delivering results. The team will need to be at its best and avoid any lapses in concentration or decision making which we have saw in the first 4 games of the season.

Ankaragucu will take on Kocaelispor on Tuesday before hosting Fatih Karagumruk next Sunday so 3 big games coming up in the space of 8 days. Lets hope for some positive outcomes.