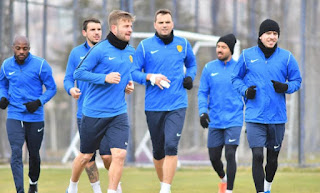 Saturday May 2010 was the last time Ankaragucu took all 3 points against Trabzonspor thanks to a Robert Vittek goal and a 1-0 win for Ankaragucu. Vittek would then go on to sign for Trabzonspor the next season after all the financial problems caused by the Gokcek family.

If you had asked any Ankaragucu fan 2 months ago if the team could win at Trabzonspor they would likely have laughed. Since then Hikmet Karaman has come in and made it 3 wins 2 draws and 1 defeat in his first 6 games since returning to the club. Even more impressive is that the 3 wins came against Galatasaray, Fatih Karagumruk and Goztepe.

Its not just the performances on the park that have impressed everyone under Karaman. You just need to follow the clubs Twitter page or his Instagram page and you will see the work that goes in off the field, even things like Marketing, Social Media and promoting the official club shop.

Hikmet Karaman has breathed life back into Ankaragucu. A club that was down and wounded with players suffering with fitness and confidence.

The first thing Karaman has changed in the team as he looks to guide Ankaragucu to safety, is the defence and how the team defend .Ankaragucu were leaking goals almost every match. But they now look more solid and organised with Sarlija and Kulusic forming a strong partnership at the back.

Geraldo again impressed last week and its no just about him building on his fitness as he hadnt played much football when joining Ankaragucu. Captain Stelios Kitsiou was back to his best last weekend with 2 assists and again proving why he is one of the best wing backs in the Super Lig.

On the opposite side of the pitch Karaman again preferred to go with Atilla Turan who chipped in with his 1st assist of the season against Goztepe.

The team will go to Trabzon with confidence after the 3-0 win against Goztepe last week. It was an excellent overall performance and again Borven showing if you create opportunities for him he will score.

The Trabzon match will be another difficult match. But another one which Ankaragucu can take points from. Its the same old story from Trabzon which has been the same ever since I have been following Turkish Football. They tend to get off to a bad start, before going on a good run where they look like they can challenge but then fail in some of the must win matches.

They have a lot of good attacking options in Nwakaeme, Yusuf Sari, Caleb Ekuban and Djaniny who after a slow start has looked impressive. The problem with Trabzon is inconsistency and although they have looked better at the back, you still fancy your chances of scoring against them.

If Ankaragucu can stop the likes of Nwakaeme and Djaniny and stay organised they have the pace with the likes of Saba, Geraldo and Paintsil to punish Trabzonspor on the counter attack. The key to the match will be the defence and making it difficult for Trabzons attacking players.

Early team news, Korcan Celikay has returned to full training while Daniel Lukasik and Alper Potuk are both carrying knocks and will be evaluated.