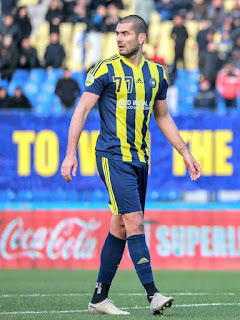 Ankaragucu kick their pre season training camp off with a 0-0 draw against Sivasspor and then followed that up with a 2-1 win over Romanian side Viitorul thanks to goals from Borven and Ali Kaan. Most of the new signings we reported previously played some part in the matches and some of the academy players got a run out too.

On the transfer front Ankaragucu have signed Eren Derdiyok from Pakhtakor in Uzbekistan. The former Swiss International also had spells in Turkey with Galatasaray and Goztepe. Derdiyok now 33 is a powerful target man and should do well in Lig 1, but his rumored 800K salary over 2 years is a big concern. Especially when the club are refusing to give Borven a smaller amount of money to stay.

Also joining the club is Abdullah Durak who is 34 years old and signs on a free transfer from Rizespor. Another example of the short term transfer policy that has damaged Ankaragucu for years. Experience is an important factor when building a team, but it should be a mix of young and old. This transfer window has saw the club sign mostly players in their 30s.

The biggest news of the last couple of days came from WebAnka who reported that Ankaragucu wont receive any transfer fee for Alper Potuk despite Faruk Koca claiming the club would. Its another example of the lies Ankaragucu fans are told if this turns out to be true. Alper was under contract with Ankaragucu, the teams best player, and had other clubs interested. Why would Koca allow him to leave for free?

Talented Ankaragucu youngster Berke Gurbuz claims the club didnt offer him a new deal and he now has offers from Lyon, Nice and Dijon in France. Suat Kaya who impressed when sent out on loan last season is also wanted by Ankaraspor. Ankaragucu fans however want the youngster to be given his opportunity with the club.

Finally, congratulations to Fatih Demir form the Ankaragucu Academy who has been called up to the Turkey U16 National team. Another exciting talent at the club.