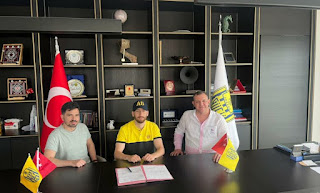 Ankaragücü made their second signing of the summer after announcing Georgian International winger Giorgi Beridze on a 2+1 year deal.

The 24 year old started his career in his home country before moving abroad to Gent in Belgium. He couldn’t break into the first team and spent a season with the Lokern youth team.

A move to Hungary kick started his career with a successful spell at Trencin. He then won a move to Ujpest playing 96 games scoring 33 goals and adding 20 assists. He also has 4 caps for the Georgia national team.

The Turkish Super Lig will be a step up from the Hungarian league but hopefully he can settle in and have a successful time with Ankaragücü.