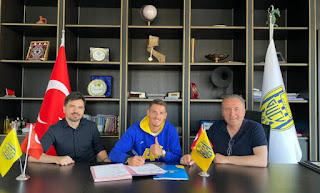 Ankaragücü made a surprise announcement on their Twitter page today as they announced the signing of Greek winger Anastasios Chatzigiovanis on a free transfer. The 24 arrives from Panathanikos where he spent the last 6 seasons after coming through their youth team.

Tasos as he is known is a quick winger who reminds me of Saba Lobjanidze from the 5 minute YouTube video I saw of him today. He is said to have a lot of talent but had a disappointing campaign last season and will look to kickstart his career in the Turkish Capital after singing a 2+1 contract.

In other news, Emre Yildiz confirmed the club are close to signing another player from abroad and hope to announce it soon. Mustafa Dalci will decide whether the team extend the contracts of Aatif and Geraldo, and it’s unlikely that Owusu will return to the club.

The club have also agreed a deal with Jonathan Paintsil on the money he is owed and continue discussions with Hector Canteros. They hope to lift the transfer ban in the next couple of weeks.