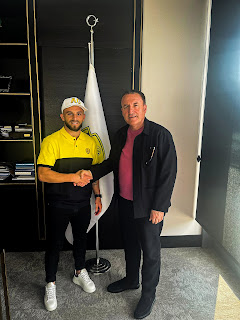 Ankaragücü announced their 4th signing of the summer this afternoon with Portuguese midfielder Pedrinho arriving in the Turkish Capital.

The move is a big coup for the club as the 29 year old was named in the team of the season in the Portuguese Super Lig adding 14 assists to his name. It is believed the club paid £75,000 for the player who has signed  a 2 year deal.

Ankaragücü haven’t had this kind of player in their team since the days of Marek Sapara. Our very own Kanka Miguel gave us some insight into the player earlier today which highlight how good a player Pedrinho is both going forward in a creative role, and also defensively winning the ball back.

Faruk Koca confirmed the club are in talks with multiple players who play for their national team and more signings will be announced soon. Benjamin Tetteh, Elaqium Mangala and Budu Zivzivadze are all linked with a move to the club.

In other news Erdi Dikmen has signed for Altinordu permanently in a £140,000 move after his loan spell last season.