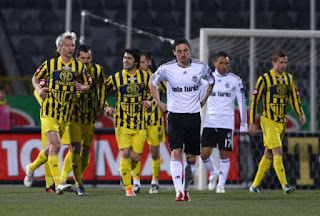 You have to go back to 2011 for the last time Ankaragucu beat Besiktas through a Serdar Ozkan goal in front of an empty 19 Mayis Stadium due to a stadium ban.

Since then, Ankaragucu have spent the last 11 years in financial mess, involved in many turbulent moments off the field, and 5 of those seasons in the lower leagues.

Sunday nights game sold out in just over a day as 22,000 Ankaragucu fans quickly snapped up the tickets showing again why they are one of the most loyal sets of fans in Turkey.

After the first 4 games of the season Besiktas are flying and sit top of the table with 3 wins and a draw, while Ankaragucu are 2nd bottom with 2 defeats and a draw. They have played 1 less game due to having a bye 2 weeks ago.

I have watched all of Besiktas games this season and they have been very impressive going forward. They have so much pace all over the pitch with Rosier and Masuaku to very attacking wing backs. Rosier arguably the best RB in the league.

In midfield they have technical players in Deli Alli and Salih Ucan, while on the wings they have 2 of the fastest players in the league in both Nkoudou and Muleka who support new striker Wout Weighorst who is a giant and holds the ball up well, while very strong in the air. Nkoudou in particular is a very good player who has everything in his game if he can stay injury free and consistent.

With the amount of speed and quick movement in the Besiktas team, New coach Omer Erdogan will need to counter that with playing his fittest team.

We saw in the last couple of games, how unfit and slow this Ankaragucu team are and how it had been poorly prepared by former manager Mustafa Dalci and Emre Yildiz.

Omer Erdogan is a quality coach and will be up against it from his very first game. In defence he has a big headache as only Sinan is tall enough to compete with Wout Weighorst in the air, but he is so slow and would easily be exposed and dragged out of position from Besiktas interchanging and mobile attack.

In midfield Pepe, Pedrinho, and Zahid arent the most athletic of players and we will need to wait and see if new signing Tolga Cigerci is fit enough to start. We may see a surprise start for Ali Kaan who is quick and energetic and if partnered by 2 of the more technical players may be a good option.

Jese Rodriguez again showed he is no where near fit enough to start for Ankaragucu and was a big part of the teams problems last week. Tasos should come in to take his place in the team but that leaves Beridze as the only other option in that area and he hasnt shown anything of note in his first couple of games. Could their be another shock start for Gboly Ariyibi?

Earlier in the week it was reported that Mustafa Dalci and Ali Sowe had a fall out before the Fatih Karagumruk match, so that leaves only Macheda and Eren as options for the striker position. Macheda failed to impress last week but should get the nod.

This is a huge match for both sides, Besiktas looking to keep their good early start going and show they are capable title contenders this season, while Ankaragucu need to get their season going and a draw or win would be a great way to start for new manager Omer Erdogan.