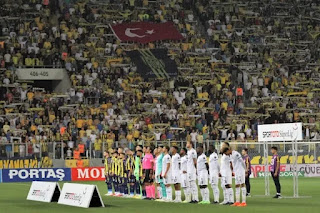 Before the start of last nights game i didnt have much expectations due to how Ankaragucu have started the season compared to Besiktas. Omer Erdogan took charge of his first match, and despite having less than a week to prepare, showed some encouraging signs despite the loss.

Ankaragucu fans snapped up every ticket for the sold out 21,000 Eryaman stadium, and what a noise they made even hours before kick off.

Straight from kick off you could see the difference in Ankaragucu play with the high press and work ethic all across the park. Besiktas started on the front foot, but the Ankaragucu players were giving them no time on the ball.

Besiktas had the ball in the net after 11 minutes but the goal was correctly ruled out for offside and Bahadir got lucky in the Ankaragucu goal.

New signing Tolga Cigerci was looking very impressive for Ankargucu in the middle of the park and put in a fabulous cross for Beridze who headed past Bilgin to make it 1-0 after 26 minutes.

Besiktas took no time to get back on level terms and 3 minutes later equalised through Muleka. Oguz failed to stop another cross coming into the box, Bahadir saved the cross but palmed the ball straight to Muleka who put the ball into the back of the net to make it 1-1.

Six minutes later and Besiktas took the lead. Marlon and Beridze let Deli Alli sneak in at the back post from a Weghorst knock down and the English man put the ball past Bahadir to make it 1-2.

The scoring remained that way at half time and although a goal behind, Ankaragucu were playing well and still in the match.

Ankaragucu made 2 changes at half time with Diack replacing Zahid, and Firatcan replacing Oguz. Diack made a big difference with his physical presence and athleticism in the middle of the park.

Only 2 minutes into the second half and Ankaragucu were back on level terms. Another outstanding ball into the box from Tolga for Beridze who took a brilliant first touch, and then finished beautifully to make it 2-2.

At this point Ankaragucu were leading in possession stats and passes completed which is credit to Omer Erdogan as the team was playing some good football and building from the back.

Besiktas took the lead again on the 73rd minute. The referee pointed to the spot for an Eren handball and Nkoudou stepped up to make it 3-2. This is when things started to get very heated.

Ankaragucu had a couple of chances later on to tie the game through Atakan and Sinan but they both headed wide when should have done better.

Marlon was then sent off for a second bookable offence, and things turned in the stands. Umut Meras and Oguzhan from Besiktas got involved in altercations with Ankaragucu fans and Omer Erdogan. An Ankaragucu fan then ran on the field and tried to kick Mete Kalkavan the referee but instead kicked a Besiktas player.  No doubt a stadium ban is coming our way.

Next up is an away trip to Alanyaspor on Sunday in another tough game. Ankaragucu need to build on last nights performance and get all 3 points.