Good times in the capital 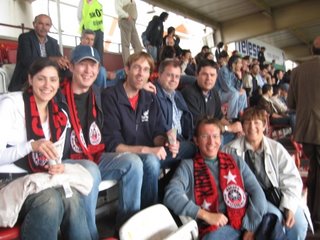 Our new found mate Dirk managed to find the pub, as did Mummy Oz Kankie. Not long later we were joined by Oguz, he of darts fame, Flying Dutchman Kanka Carlos and then Spine and French Kanka Hande. All up a very respectable attendence for a match which no one else in Ankara gave a damn about.

After beers at the Chopin we went off to the stadium where my Mum was given the third degree by a couple of female cops who wouldn't have been out of place in the presidential guard after the 1980s Argentinian junta but we still all got in in one piece.

Then the fun and games began. As usual, I've had much too much to drink to give a proper account of the match. Let me say though, finally Gencler were playing well. Admittedly this was against Denizilispor, but still.

The midfield work was good. There were plenty of passes in to edges of the box and while we didn't get many shots on goal we were all over the opposition.

The first goal though seemed almost flukey. Somehow or other Isaac Promise got up headed a ball, it stayed it the air for ages and somehow went into the back of the net.

Gencler 1: Denizli 0 (a video of us celebrating)

There was more good attacking football from Gencler but nothing much happened until the first half was almost over.

On the 44th, Haminiu sent it in to Isaac who had the keeper completely lost.

Half time and I was jumping up and down. The really amazing thing was not that we were winning but the fact that for the first time this season we were playing well. The midfield were getting their passes together and there were shots on goal. Admittedly there were a few scary moments when our defence went to sleep but at least Denizli were not able to capitalise.

Second half and I don't have a clue what happened. Denizli came out strong and then our keeper Gokhan made what was one of the most stupid mistakes I've ever seen.

He was one-on-one with someone, didn't have a bloody clue, he should have whacked the ball but instead missed it completely, the Denizli player kept going but was held back by Gokhan holding onto his shirt. No surprises that a penalty was awarded. The biggest surprise was that Gohhan din't get an automatic red card. Penalty converted.

It was tight at this stage but Gencler were still up for it. There was a chance for Risp, and no doubt others but nothing came of our attacks. Until....

Mehmet Nas had a good run into the box and with no one around him fell over. The referee therefore quite rightly gave us a penalty.

Okan stood up. Took the shot. Scored. Took off his shirt and was given a second yellow card. Outragous!!!!

Down to 10 men for the last 25 minutes but still it was Gencler who were going for it.

All up a great victory. If we can play this sort of football for the rest of the season we might have a chance. Admittedly though, Denizli were pretty rubbish.

So, Jim has asked me to point out, next up we have Ankaragucu on Monday night. We are meeting at the Chopin at about 6 p.m. Come and join us.