I knew Hillary forgot something 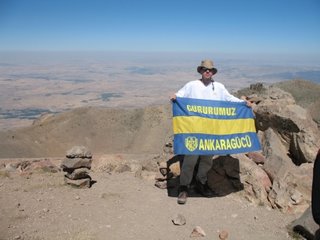 Sir Eski Kanka Jim has recently been talking about how the British exported the round ball game to various places around the world, South America in particular.

It is in the spirit of this style of colonialism that one of our Bilkent mates Robbie (no Kanka name yet as far as I can remember even though he has been to heaps of Ankaragucu games) has been travelling around Turkey.

As you can see from the photo he has claimed the mountain of Hasan Dağ (3,268 metres), near Cappadocia, for Ankaragucu. Quite an effort and one which we must applaud.

Robbie has promised to "claim" more peaks for Ankaragucu in the future and we look forward to further evidence. Perhaps next time he shouldn't just carry an Ankaragucu flag but climb the mountain in full Ankaragucu kit.