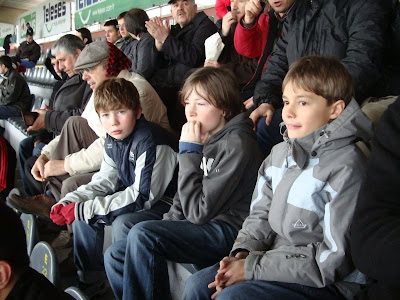 A drizzily day in Ankara, an early kick-off and not the most fashionable of opposition had me thinking that I may well be the only Kanka to show up for today's match. I was happily surprised then when I walked into the Chopin to find Darts Man Emin there with a mate of his.

Not too long later in rolled Metin from the British Embassy and a bloke (Ajay?) who is fixing the century-old plumbing of the same embassy. Then came in the Aussie Ambassador with his son Patrick and a couple of Patrick's mates. Next up was our Yankee friends Rebecca (who has her own blog - here) and Brendan and last but not least Alpine Kanka Wolfgang and Dan the Man. All up, not a bad turnout.

Well, let's just say the first half was pretty dire. Playing without a striker, both Aussie Bruce and Kahe were on the bench, pretty much summed up our intentions. Our guys had clearly been told to get a point out of this match and, er, they played as if they were told to lose the match.

Compared to recent weeks this was absolute rubbish. Our passes weren't sticking and control of the ball was pretty dire. Then we come to the linesman. A Denizli player made a tackle which any rugby player would be proud of. Just three feet away was the linesman who saw absolutely nothing wrong. Talk about absolutely pathetic. We were getting kicked all over the place and the referee and linesmen were letting Denizli get away with it. It was a disgrace and it was the first time for quite a few years that I heard Gencler fans actually swearing at the officials (if you know Gencler fans then you know that we never swear).

Denizli had a great chance on a counterattack when one of their players got free. It was one-on-one with the keeper and the player clearly decided he wasn't going to try and score but instead get a penalty. He fell down in the right spot but thankfully the referee made his one and only decent decision of the match.

No real chances in the first half, although Troisi did get a good solid shot on goal, and quite frankly I was wishing I was back home surfing the interwebs, or playing with my son, or at the dentist.

Second-half and Gencler came alive, sort of. We started to play into the box, but at almost no time did we look really dangerous.

It seemed that we kept on playing down the right when we should have been going down the left. The only chances we did have came from the left, the best being a cross into Mehmet Nas who headed the ball just over. We had one ball come off the post (who had that shot I'm not sure) but in general it was pretty tame stuff.

With Kahe and Aussie Bruce brought on we piled on the pressure. Bruce was clearly out of form and Kahe also really couldn't get anywhere. Troisi was making moves, as was Jedinak (who was clearly targetted for some ome rough treatment from the Denizli players) but the goal never came.

With a couple of minutes to go we were attacking and a Denizli player fell down in the box, the ball went into touch and then the referee blew his whistle for the player to be treated. Once the player was fine the referee then gave the ball to Denizli instead of to us for a throw-in. The Gencler players and the crowd were all complaining but the game continued and then came the final whistle.

Match over and obviously pissed off at what was some terrible refereeing Ilhan went up to the referee to explain to him that he was a dickhead. Out came a yellow, Ilhan's second for the match, and therefore out for the next match. Bloody ridiculous.
By Oz Kanka - March 22, 2009