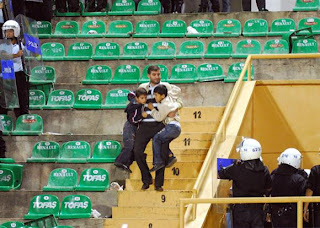 Ankaragucu's brother team has captured headlines in Turkey over the last few days, but not because they are currently in third place. During this past weekend's match, some of the Bursa fans acted, well, inhospitably, towards the Diyarbakirspor players and fans implying (with the help of shards of green plastic from the stadium seats) that there was some connection between the PKK (The Kurdistan Workers' Party) and the team.

I am not going to go into the whole political side of this here. If you are interested, there are a couple of Turkish papers in English (links below), and mountains of other information on the internet and in your local library. I will just say that it is unfortunate that it had to be the Bursa fans to act like this. Bursa and Diyarbakir are two of the few cities in Turkey where the the inhabitants really support their home team and not one of the big three Istanbul teams.

I know the death of Abdulkerim Bayraktar (a die-hard Bursa fan whose death occurred while performing his military service in the southeast) in 1993 will never be forgotten, but that is no excuse to lash out against fans at a football match--some so young that they were not even alive when Abdulkerim was killed.

Let's hope that for the rest of the season most of the newsworthy action takes place on the pitch and not in the stands.

To read more about the details of what happened, here are a couple of links.

http://www.todayszaman.com/tz-web/news-188331-politics-spill-onto-pitch-in-bursa-diyarbakir-clash.html
Note: The above photo was nicked from the CNN.Türk site:
http://www.cnnturk.com/fotogaleri/spor/futbol/2009/09/28/bursaspor.diyarbakirspor/5493.2/index.html#photogal
By Battle Damaged Kanka - September 30, 2009