Lots of love but no goals 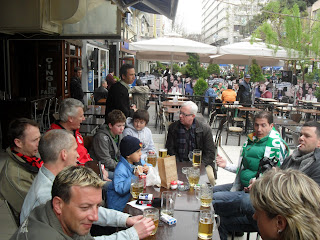 It was quite a turnout for the kankas today at the Beer Bus for today's match. I counted 12, including a few who were making their Super League debut. Luckily we had enough season cards to spare and thus weren't forced to join the queues for the 30 tl tickets.

Kizilay itself was swamped with Bursa fans, but surprisingly not as many Ankaragucu fans as I expected. No trouble though with one Bursa fan coming over wanting to take our photograph. He ended up joining us for a drink. Strangely he has a wife and kids in Melbourne but he himself doesn't speak any English. Strange.

Bursa fans were out in force for the match and the atmosphere certainly didn't make it feel as if Gencler were at home. But before kick-off it was as if we were at Woodstock (minus the drugs, nudity and mud). This was one hell of a love in. We would start chanting something about Bursa, they would reply with something about Gencler. When the players came on we called over the Bursa players and the Bursa fans applauded our wishes for an Anatolian team to win the league.

Once the match got underway though we all reverted to our original allegiances, i.e. shouting at the linesman. It was just two minutes in and the linesman had already missed one handball and possibly the most obvious offside ever - it was from a free kick. 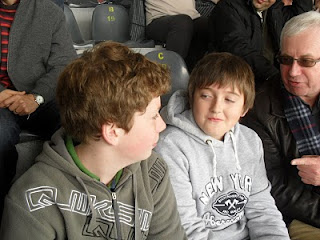 Dan the Man was already starting to voice his regret at having broken his vow not to attend another Turkish league match in his life.

The match started okay for Gencler, some decent attacks and nice passing. Very little real chances though, a couple of lame headers easily saved but that was about it. Our defence was fairly good but at times people weren't paying attention. In the end the best chance of the half came from a defensive mistake of ours but which luckily saw the Bursa attacker shooting across the face of goal.

Half-time and through the scrum to get to the toilets and to have a cigarette. It was at this point that I realised that while the security guards had confiscated my packet of matches they had missed a lighter that I had picked up at the Beer Bus by mistake.

The general consensus. "This Bursa lot don't seem that good".

Second half and Gencler were already playing for a 0-0 draw. They were slow and hopeless. Bursa meanwhile had finally woken up and started to launch attacks left, right and centre. I lost count but I guess our keeper Serdar made about six good/lucky saves. In the end Bursa probably deserved to win. 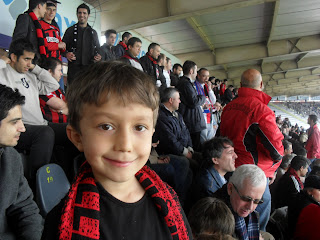 Match over and for us at least it was back to Woodstock. As we chanted pro-Bursa chants, the Bursa fans started booing us. What the hell was that all about? Were we supposed to have supported them during the game? Was Genclerbirligi supposed to throw the match?

In their anger at us they started singing pro-Ankaragucu chants... which of course annoyed none of us. But at least we got out of the stadium first and while it wasn't the best match of the season it was still a fun day out.
By Oz Kanka - April 11, 2010