Cengiz Topal checks in while Tonia and Serdar check out ! 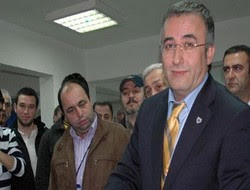 
Cengiz Topal has become Ankaragucu new president after the paperwork was signed over to him yesterday. The Gokceks and Cemal Aydin have vowed to help Cengiz get Ankaragucu out of this mess and work together.

Ankaragucu were looking at relegation to the Bank Aysa or even going out of business had Cengiz not taken over. So while there is some good news, there are still many questions to be asked and many challenges that the new management will face.

The first thing that we will be faced with is loosing some of our top players.. Serdar Kubilge has already announced on his twitter page that he has left the club, while Tonia Tisdel has signed a 1 year loan deal at Mersin. Tonia claimed he had to move while there was so much uncertainty at the club.

Marek Sapara could be set for a move to Trabzonspor, Stanislav Sestak is wanted by both Besiktas and Bursaspor. Tita and Ozgur Cek are also wanted by Bursaspor. With the season just under 2 weeks away Mesut is left with a huge task this season of Keeping Ankaragucu in the Super Lig. Indeed his place isn't even safe with reports claiming Hikmet Karaman will replace him.

The management need to look at ways Ankaragucu can make money, they have started that with the sponsorship deal with Anadolu Jet and the return of Season Ticket sales next week. The club also needs to look at spreading the brand of Ankaragucu with more club shops, merchandise and marketing and moving Stadium.

The league fixtures will be announced shortly so there will be an update on that, in the meantime i urge all you Kankas to get behind the team this season, it wont be nice to watch but the club needs you !!!
By Nady - August 25, 2011