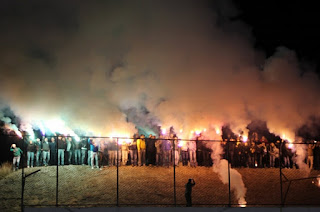 We look ahead to this Sundays relegation clash between Ankaragucu and Antalyaspor.
Ankaragucu travel to Antalyaspor on Sunday afternoon in another important game. Antalyaspor are just outside the relegation zone themselves, but are very difficult to beat at home. Only Mersin have won in Antalya this season.

Ankaragucu drew 0-0 with Bursaspor last night, and will hope to follow that up with the three points in Antalya. With only three games remaining until the January transfer window opens, its important Ankaragucu don't loose any more ground on there relegation rivals.

One positive from the game against Bursa, was the first clean sheet of the season for Ozden Ongun in Goal, the defence will hope to build on that and hope the strikers can take there chances in the game. Ankaragucu have taken one point from there last three games, however it could have been so different if they had taken there early chance in every game.

Antalyaspor go into the game on the back of a 1-0 defeat at Eskisehirspor and will be hoping to get back to winning ways themselves. They have some good players in Necati Ates, Ugur Inceman and ex Ankaragucu Striker Tita Gokcek. Tita signed for Ankaragucu in the summer but returned to Antalyaspor due to the financial problems haven not played a single game.

Last season when the two sides met they drew 2-2 in Antalya with both Michael Zewlakow and Marek Sapara on the score sheet. In the return game in Ankara it was Antalyaspor who won 3-2. They were 3-0 up before a late comeback from Ankaragucu in the second half, goals from Jan Rajnoch and Roman Bednar weren't enough to see Ankaragucu take anything from the game.

This is a huge game in which Ankaragucu are capable of winning, they need to show the same commitment they have in the last few games and with a bit of luck and better finishing then the three points are possible.
By Nady - December 10, 2011