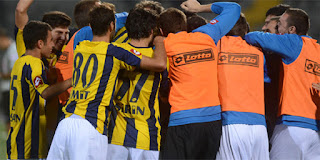 Ankaragucu travel to Manisa this weekend for Monday nights match at Manisaspor. The home side sit 2nd in the PTT Lig at the moment while Ankaragucu are bottom. Timur Ozgoz will miss the match through suspension after picking up another yellow card against Karsiyaka at the weekend. Another match against one of the promotion chasing teams and Ankaragucu will need to show the kind of form from the last two games if they want to take anything from Mondays match.

Manisaspor have drawn 1 and lost 1 from their first two games since the winter break. A 0-0 draw at home to Kartalspor and a 2-0 defeat at Sanliurfaspor. The last time both sides met the game finished in a 1-1 draw. Both managers agreed after the game that Ankaragucu deserved to win and Manisaspor should have had a man sent off in the opening minutes of the game.

The two most important players in the Manisaspor team are Polish midfielder Maciej Iwanski and Brazilian forward Kahe who has scored 11 goals this season. They don't posses a lot of pace which will suit Ankaragucu. Iwanski does however have excellent technique and will be a danger from set pieces. Manisaspor will be looking to get back to winning ways as they challenge for automatic promotion.

Its a huge blow for Ankaragucu having to do without the suspended Timur, it looks like young Umut Nayir will be his replacement. Umut was a prolific goalscorer in the youth team but is yet to score his first goal for the first team. A very different kind of player to Timur, Umut is more physical and not as mobile. It will be important that the likes of Mert, Kaan and Bilal can provide the service for the young striker.

Ankaragucu will be looking to take the 3 points from this one as they look to close the gap on their relegation rivals. In two weeks time the team have a huge game with Kartalspor and Ankaragucu will want to go into that game within touching distance of their relegation rivals. Again i will refrain from making any predictions on Monday nights game which will be shown live on TRT Spor.