PTT Lig relegation fight round up ! 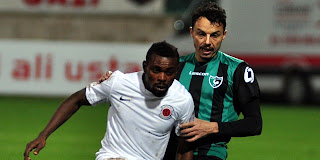 Things were looking good for Ankaragucu today until Tavsanli won 1-0 at Denizlispor thanks to a sole strike from Ferhat Culcuoglu. The result takes Tavsanli out of the relegation zone and gives them a much needed win in the fight for survival.

Earlier in the day Goztepe lost 5-1 at Rizespor, Goals from Eren Albayrak, Florin Cernat, David Depetris, Semih Kaya and Cenk Akilic saw off the hopeless Goztepe whose goal came from Saban and had two men sent off.

Boluspor won 2-1 at home to Samsunspor with the goals coming from Alin and Yilmaz, the only goal for Samsun came from Ozgen. It was ex Ankaragucu men who were making the headlines as Sanliurfaspor drew 1-1 at Kartalspor. Tonia Tisdell was firstly sent off for Sanliurfa and will miss next weeks match at Ankaragucu, and then Serdar Ozkan scored a late penalty to give Sanliurfa a share of the points.

Ankaragucu take on Manisaspor tomorrow night knowing they have to take something from the game. It looks like Mert Erdogan and Kaan Kanak will pass fitness tests. Teoman is set to start up front in the place of the suspended Timur Ozgoz.
By Nady - February 10, 2013