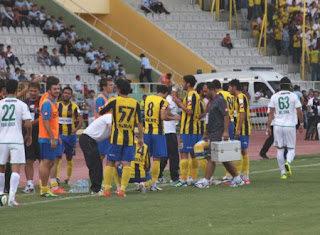 This weeks match preview is a couple of days early as i fly out to New York tomorrow :-). Ankaragucu host Sanliurfaspor on Saturday afternoon and will be hoping to restore some pride after a disappointing performance at Manisaspor last night. Manisa showed exactly why they are at the top of the table with a deadly performance and winning 4-0.

Mert Erdogan will miss Saturdays game through suspension and will be disappointed as the replay showed the Manisaspor player taking a dive for Merts second yellow. The good news is that Timur will return to the starting line up, Ankaragucu missed his running and experience up front last night. Young Umut Nayir looks a long was off being ready for first team football.

The Ankaragucu team need to go out and just enjoy their football from now until the end of the season. Any hope of survival is over as there is nothing to show that this young team can go on a run of wins to climb the table. A win here and there isn't good enough and the gap is to big for Ankaragucu to pull back. Some important players like Bayram Olgun, Mehmet Tasci, Timur Ozgoz and Gokhan Erdogan are all out of contract at the end of the season too.

The visitors Sanliurfaspor are starting to put a decent run together and are still hoping to make the play off places. They will have to do without former Ankaragucu winger Tonia Tisdell who is suspended after being sent off during the weekends 1-1 draw at Kartalspor. They can still however rely on the midfield powerhouse Alfred Sankoh and another former Ankaragucu winger in Serdar Ozkan. Teteh Bangura signed for the club from Bursaspor during the transfer window and will also be a threat.

It looks like Mehmet Tasci will also miss the match for Ankaragucu through injury, so there could be a place for Emre Tasdemir who attracted interest from Galatasaray, Bursaspor and Trabzonspor in January. This will be the first Ankaragucu match i have missed on TV for a few years, ill be hoping for a nice surprise when i check my phone in New York.