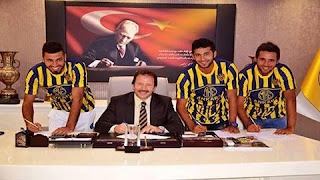 Ankaragucu trio Orhan Evci, Aytac Oden and Volkan Geyik have given the club a massive boost by signing new contracts until 2016. Pictured above with President Mehmet Yiginer the club will now push on in trying to keep Timur Ozgoz and Mert Erdogan.

After shaky starts with their Ankaragucu career Aytac and Orhan became important players for the club. Both can play at right back or midfield with Aytac also able to play at central defence. Volkan has formed a good partnership with Gurkan Alver who also signed a new contract last week.

The club now have a squad that are capable of fighting for promotion next season, if Timur and Mert stay then anything will be possible.
By Nady - July 02, 2013