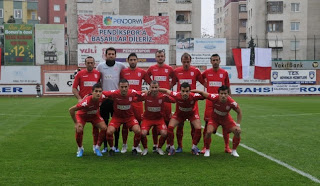 From the North West of Turkey Bandirmaspor were promoted to the Turkish Lig 2 after winning Lig 3 in the 2009/10 season. Founded in 1965 they have won Lig 3 on 3 occasions. Nicknamed the Ban Ban they finished 7th last season and again will look to build on that.

They play at the 17 Eylul Stadi which holds 5400 which is situated in the Sea of Marmara which is another nice away day for the Kanka Group to think about. They play in Red strips and will be a tough team to beat. Like last season their will be no easy games this season for this young Ankaragucu side.
By Nady - July 13, 2013