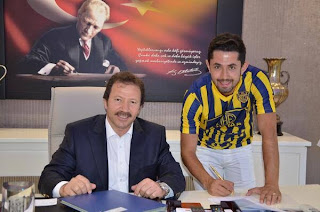 Mert Erdogan today agreed a new 1 year deal with Ankaragucu to hand the club a massive boost as they look to bounce back into the PTT Lig at the first time of asking. When the season ended many believed it would be another season of fighting relegation for Ankaragucu as it would be difficult to keep the talented players at the club.

So far only Enes Kubat and Bilal Guden have departed. Mert shunned offers from Adana Demirspor and Ankaraspor to stay with the club. It is now hoped the club can keep Timur at the club and if the German striker agrees to a new contract it will give the club a big chance of promotion with his goals.

The Round Ball in Ankara would like to thank all the young players of have agreed to stay on at the club this season and fight for the clubs future !
By Nady - July 04, 2013