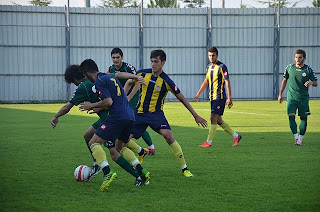 Ankaragucu maintained their unbeaten pre season run after a 2-1 win over Anadolu Selcukluspor at Tandogan facilities. The club have returned to Ankara after a successful training camp in Bolu. Again Umut Nayir was on the scoresheet to make it 3 goals in 2 matches for the young striker. Umut has the task of filling the void left by Timur Ozgoz. The youngster has a fantastic goalscoring record at youth level and showed glimpses of his talent last season.

The other goal came from Serkan Sirin as Ankaragucu prepare for the start of the new season which is two weeks away. In other news reports claim the season ticket numbers has risen to 15,000. A truly remarkable achievement for a club who will be playing in Lig 2.
By Nady - August 25, 2013