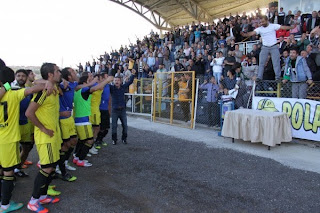 One of the most interesting teams that Ankaragucu will come up against this season is Polatli Bugsasspor who play in the outskirts of Ankara. They are also linked to the Gokceks and like Ankaragucu have had troubled times under their leadership. It is believed that they still have links to Melih Gokcek which could see the game between the two teams quite hostile.

Speaking to Jim today we were trying to work out where Polatli play their home games. It seems that they play in the Stadium of Hell otherwise known as Yenikent which is in the outskirts of Ankara. The stadium holds just over 25,000 which means there will be plenty tickets for the match available. Some reports also say they play their home games at Sincan Sehir Stadium which holds about the same amount.

Founded in 1984 as Egospor they changed their name to Polatli in 2005, the club were close to promotion last season but lost out in the play offs. Their squad consists of former Ankaragucu players Emre Aygun, Baki Mermicek and Mustapha Er.  Both Timur Ozgoz and Bayram Olgun have spent time on loan at Polatli in the past.

Both sides will meet on the weekend of 9th October at Polatli. The home match will be played at the 19 Mayis on 26 February. Polatli are one of the favourites this season for promotion and both matches Ankaragucu will need to be at their best if they are to take any points.

In other news Bilal Gundogdu will miss the first couple of months of the season after picking up an injury in training. The club also wished the fans Byrami Mubarak Olsun and season tickets are on sale from the club shop on the 12th of August from 1300.