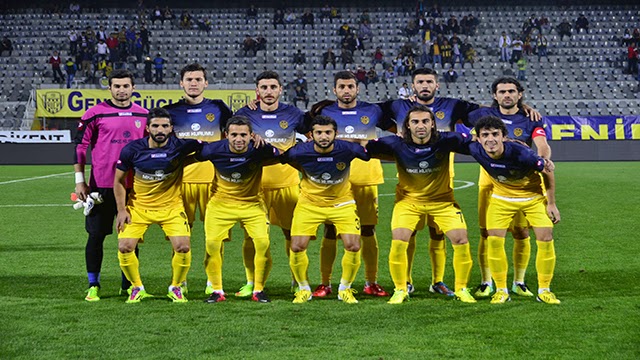 There was a game on tonight at the 19 Mayis Stadium as Ankaragucu hosted Tepecikspor, unfortunately not a single member of the Kanka group including myself knew it was on. The game had been changed apparently due to the Bayram holiday this coming weekend. I was just about to tuck into my dinner at my parents house when i got an alert from Fanatik to say the Ankaragucu vs Tepecikspor game had just kicked off.

So the coach went with the same team that started last weekends match at Altay with Orhan Evci keeping his place in place of the injured Selim Teber. Youngsters Ramazan Adiguzel and Hasan Kaya both made their debut in the second half. Hasan Ayaroglu also came on as he continues his return from injury.

Tepecikspor started the game with former Ankaragucu strikers Metin Akan and Sinan Kurumus up front, and it was the later who would return to punish the club he started his professional career with. Sinan scored twice to put Tepecikspor ahead both sides of half time, while Umut Nayir and Serhat Gulpinar scored the goals for Ankaragucu.

Sinan had a good spell at Ankaragucu impressing in the PTT Lig before moving onto Besiktas. Many were surprised to see him make that step up but there is no doubting he has the quality and is too good for this level. Tepecikspor are a poor side, they have one player of quality and thats Sinan. It just goes to show that if our chairman Mehmet Yiginer would take his head out the sand and sanction a couple of good signings to help the attack and wingers then we could win this league.

This league is there for the taking, there are no teams such as Altinordu or Alanyaspor who will go on long winning runs. Having said that Bandirmaspor, Nazilli and Goztepe all won their matches tonight. As it stands Ankaragucu are only 1 point outside the playoff places but they are no 5 points behind leaders Nazilli and Bandirmaspor. Next opponents for Ankaragucu? A tough away match at Bandirmaspor next Wednesday.

There was more bad news at the end of the match as Mehmet Yiginer got into an argument with supporters near the VIP section. He had to be taken away by other members of the management team. Coach Muammer Ozdemir also refused to give a press conference after the match and will instead give one tomorrow morning.
By Nady - October 01, 2014