Genclerbirligi still undefeated... but not brilliant

It was a better Genclerbirligi this week than last week's very disappointing
draw with Alanya, but it was still a draw and well... there is something missing

A sunny Sunday afternoon and nothing better than sitting outside and watching some footy. The Alerta Pub was packed and the mood was one of fun. Some of the kankas to take advantage were Spine, Dan the Man, Flying Dutchman Kanka and Alex. We also met a new kanka in Jimmy, a bloke who has just arrived in Ankara and has already said we may well get a season ticket. 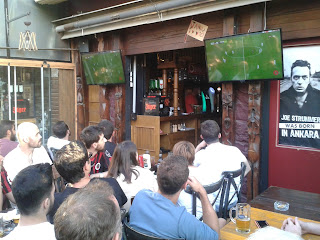 Footy-wise it was ... well, not brilliant. The referee was rubbish and the Gencler players just weren't getting into it. Konya were clearly tired after their mid-week Europa League match but we were finding it difficult to get through.

Finally though Serdar Gurler got on the end of a long ball. He controlled it brilliantly and took a shot. GOAL!!!

The crowd at the pub erupted and then we went back to averageness.

Until towards the end when Konyaspor started to really go on the attack... and our defence was lacking. Then it looked like we could have the winner. A ball was put in front of Stancu with just the keeper in front of him. His first touch was atrocious though and it was groans all round at the pub.

Just a few minutes left and arrrggggghhhhhh. Konya got through after some sloppy defence. Another draw.
By Oz Kanka - September 20, 2016