Despite Eski Kanka's impish sense of humour in making it seem like I'm about to post a masterwork on a game I haven't seen, these game notes will be brief.

But first, it would be amiss of me not to mention the big news of the week: that Fenerbahçe signed a sponsorship agreement with Hello Kitty. 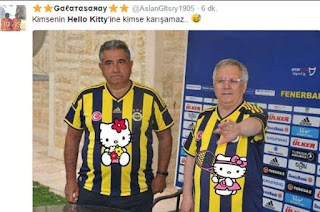 With their 2-1 win over Kırklareli, Ankaragücü have made their best start to a league in 9 seasons.

Ankaragücü's first goal came in the 32nd minute after a breakthrough on the wing and a lucky cross in for Ömer Bozan in the box to finish. (Link - scroll to 21 minutes)

Some midfield mistakes and a chip over the keeper got Kırklareli an equaliser after half time. (Link - scroll to 13:40).

SporAnki was enthusiastic about the striker's performance:

Ömer Bozan, who was left out of the first team at the end of last season... could have been sold, but he stayed in the team at the request of technical director İsmet Taşdemir.

After performing well at [summer] camp and his successful performance in the first week, Ömer Bozan also gave life to the team at yesterday's Kırklarelispor match.

But fan Eren Çelik urged a little more caution from the comments of the Güçlümedya Facebook page:

Every season it's like this, we're leaders for the first 8-9 weeks, and then the team falls apart. I hope this season is different.