ANKARAGUCU - CARNIVAL ATMOSPHERE TURNS SOUR IN THE 2nd HALF !

The kankas met-up in the Sports Cafe.   Maniac Kanka Harun, Scouse Kanka Marcus and Cider Kanka John.    Into the Stadiuk we went and I had to laugh at the banner which the 100 Kastamonu supporters put-up at the away end.    It read ...... Tayfa 37 Istanbul.   Which means that they were the Kastamonu Group from Istanbul.   Nice to know that there are some supporters there who don't support the hated 'Big 3'. 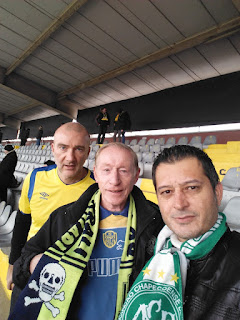 Ankaragucu went straight into the attack from the off and had two reasonable chances with headers from Mustafa and Onur which didn't find the target.

Then, in the 6th minute the 'carnival' started when hundreds of Blue and Yellow balloons were released by Maraton.   7 minutes later another great chance by the Ankaragucu No4 but a great shot had an equally great save by the impressive Kastamonu goalkeeper.

Note - Maniac and Scouse took a video.   Can you guys put it up here ?

1 minute later the goal came as no surprise after constant Ankaragucu pressure.   A corner was swung over on the right and back-headed in the box to Alihan on the far post who met it cleanly and volleyed in to send us all singing.

2 minutes later it was the Bursa song, and with Ankaragucu in full flow we were expecting No2.

However, the goal arrived at the other end to take the wind out of Ankaragucu and return our feet to the ground.   Harun was disposessed in midfield and Kastamonu broke in numbers.   An astute pass was made to an unmarked attacker who arrived in support of the breakaway move and he curved a shot around Emrah for a well taken equaliser.

On the half hour mark and it was still Ankaragucu searching for the goal to send them in at half time ahead.   There were 3 blocked shot attempts one after the other and the ball going out for yet another corner (I lost count of the 1st half corners !!).

One minute later there was a pin-point cross from the left by Omer but Enes made a weak stab at it and it was easily saved.

So, going in at half time all square didn't affect our optimism.   So much so, that Maniac Kanka suggested we change position to the Scoreboard End to have a better view of all the Ankaragucu goals in the 2nd half.   Ho ho ho ......... and how wrong we were !

There were only 3 attempts on goal made by Ankaragucu in the 2nd half.    Two free kicks outside the box which were well saved and a cracking effort by Omer which hit the post and was cleared, and that coming at a crucial part of the 2nd half would have been an Ankaragucu equaliser if the ball had been an inch to the right !

However, as I said earlier, it was a match of 2 halves and Kastamonu took the match by the scruff of the neck and scored 2 further excellent goals.

They went 2-1 ahead in the 56th minute when former Ankargucu player, Hasan, fired in a great shot.

We were still shouting for an Ankaragucu equaliser but they were having to resort to long range efforts with Kastamonu taking control of the match.

Then, with 10 minutes to go we were silenced when there was a fast breakaway with the ball played out to an unmarked attacker on the left and he made no mistake by burying the ball in the back of the net to put the match beyond Ankaragucu.

There was another chance for Kastamonu to go even further ahead 2 minutes from time when an attacker was clean through, but his shot went narrowly past.

Into time added on, and with the tribunes beginning to empty, we heard the 100 Kastamonu supporters singing as the Ankaragucu tribunes went into 'silent mode' !

This match should have been 'put to bed' in the 1st half but there can be no excuses for Ankaragucu's pathetic and toothless 2nd half performance.   Ismet Bey needs to address this problem, and fast !

It was reported last night that some of the Ankaragucu supporters were heard swearing at the end of the match.   If this has been pick-up by the TFF Representative there, we can expect further stadium bans !!

So, Ankaragucu slip to 2nd top in the league, but now there is a threat from below as Menemen and Karsiyaka make up ground and take closer order in the Top 5.

Therefore, next week's home match against Erciyes takes on even greater significance.