ANKARAGUCU MOVE FOUR POINTS CLEAR AT THE TOP OF THE LEAGUE !

It was a tense match at the 19 Mayis Stadium today with Ankaragucu and Menemen settling for a share of the points in a match that swung from end to end throughout.   With Gumush.....spit......hane losing at Kastamonou, it allowed Ankaragucu to move 4 points clear at the top of the league with only 5 matches left till the end of the season.   Also, Gumush have the more difficult run-in than Ankaragucu to negotiate. 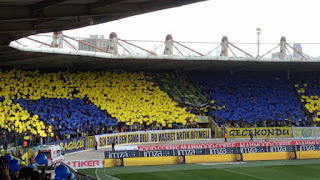 The Stadium was full again in all the tribunes and there were about 200 in the away section.   An amazing carnival atmosphere with Maraton setting off hundreds of blue and yellow balloons and Gecikondu covering all their heads in blue and yellow paper flags in the 6th minute. 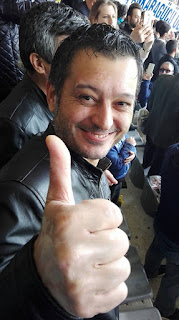 Maniac Kanka Harun just before the kick off.    He was still smiling at the end !!!

Ankaragucu came out of the traps fast and Omer almost opened the scoring in the 3rd minute when his free kick went narrowly past the post.   Then 4 minutes later, Man of the Match, Serkan, exchanged passes with Erhan and shot just over.

16 minute mark and all the tribunes serenaded us with the Bursa Song !

One minute later the Ankaragucu pressure paid off and they took the lead.   From a throw-in on the left, Kenan latched onto the ball outside the penalty box and let fly with a stunning shot into the top right hand corner.   A goal to savour.

There were 2 more good opportunities to extend the lead before Menemen started to come into the match.   Harun and Serhan both had chances but Harun shot over and Erhan scuffed his shot past the post.

It was around the half hour mark when Menemen started to look dangerous.

First, a cross from the right was headed goal bound in the centre of the goal, but Korcan made a reflex save to tip the ball over.

Second, Sezgin was dispossessed in the Ankaragucu half and an inviting cross came over but Korcan came to the rescue again.

Third, and the equaliser !   A Menemen corner was taken quickly and crossed in for an attacker to have a free header with the Ankaragucu defence all at sea and in panic mode.

Approaching half time and again Sezgin gave the ball away needlessly and with a Menemen attacker on a one to one with Korcan, he made a point blank save to spare Sezgin’s blushes !

Almost on the half time whistle and Kenan almost produced another stunning strike from 30 yards but the goalkeeper made a spectacular save to tip the ball over.

Then on the half time whistle, Erhan almost scored but his angled shot went narrowly past.

So, going in at half time I suppose a draw was a fair reflection of the play so far with both teams scorning good chances.

Not much to say about the 2nd half which was played at a slower pace.   However, Kenan had 2 excellent opportunities to kill the game but especially with one effort he had the goal at his mercy but amazingly he shot past the post.

So, I suppose on the upside we should be reasonably happy that Menemen didn’t sneak a winning goal, but in all honesty Ankaragucu should have taken their numerous chances to take all three points.   Plenty of work to be done on the Training Pitch this week me thinks !

Next weekend Ankaragucu will be ‘away’ at the small and disgusting Ostim Stadium in the outskirts of Ankara to play Bugsas in another game which they should win.    The Stadium is so small so the kankas will not attend this match !

Optimism is back on the menu with promotion now in sight on the horizon !!!