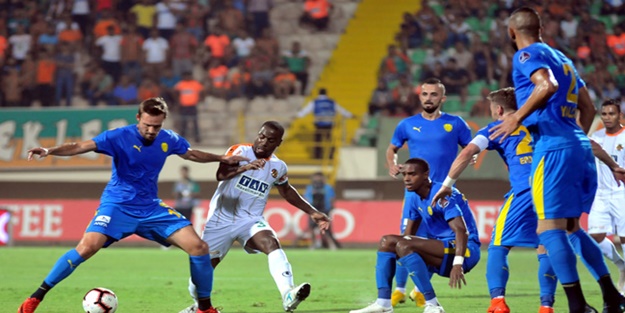 Ankaragucu recorded their first win in the Turkish Super Lig for just over 6 years with a 2-0 win at Alanyaspor. After a hard fought performance on the opening day against Galatasaray, the team followed it up with a brilliant showing in Alanya and the Ankaragucu fans were in fine voice as they celebrated a deserved 3 points.

İsmail Kartal went with the same team as last week and his faith in his team paid off as Ankaragucu played with passion and flair from the very first kick. This Ankaragucu team are going to be very entertaining to watch. With so many flair players in the team such as El Kabir, Mokhtar and Bifouma they are a joy to watch and linked up so well together.

Ilhan Parlak has taken a lot of stick in his time with Ankaragucu but last night was his best performance for the club with his tireless work off the ball, but also played a big part in some key moments. A 30 yard free kick early in the match was well saved from Haydar in the Alanyaspor goal to keep the score level.

Johannes Hopf at the other end made an excellent save from Villafanez who headed the ball into the bottom corner but Hopf managed to keep it out. Younes Mokhtar is already looking like a key player for Ankaragucu and he almost gave the team the lead but his shot was well saved from Haydar.

The first half was a fairly even match with both sides looking dangerous in attack and pretty open at the back.

Then came the turning point in the match. Just into the second half Isaac Sackey smashed his elbow into the head of El Kabir and after consulting with VAR the referee showed the Alanyaspor midfielder the red card. It was a stupid decision by the player who let his team mates down.

Alanyaspor still pushed on and looked for the opening goal as Djalma saw his shot from outside of the box to just wide.

The deadlock was finally broken on the 65th minute. Brilliant play from Younes Mokhtar as he turned his man inside out before putting in a pin point cross for Ilhan who headed the ball past Haydar to make it 1-0 Ankaragucu!

Five minutes later Ankaragucu were also down to 10 men as Thievy Bifouma was shown his second yellow both for needless fouls. He played very well again and will be a big loss against Trabzonspor through suspension.

Ankaragucu finally secured the 3 points into injury time. A mistake at the back from Alanyaspor allowed Tiago Pinto through on goal and the Portuguese finished beautifully as he chipped the ball over Haydar to make it 2-0 and send the Ankaragucu fans back to the Capital ecstatic.

A brilliant win for Ankaragucu who will host Trabzonspor next Saturday at home in front of another big crowd.