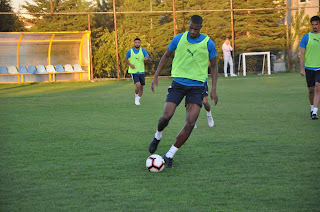 Ankaragucu face a difficult encounter at Alanyaspor on Sunday night in week 2 of the Turkish Super Lig. Both sides will be looking to record their first win of the season after defeats in week 1 where both were unlucky to come away with nothing.

Ismail Kartal will take plenty of positives from last Friday nights match at home against Galatasaray as the team were cheered on by 20,000 Ankaragucu fans who made a fantastic atmosphere at Yenikent Stadium. The team cant count on that same support on Sunday but as usual the Ankaragucu fans will make the trip to help cheer the team onto a positive outcome.

Ankaragucu played very well against Galatasaray, and were particularly impressive in attack with Thievy Bifouma, Younes Mokhtar and Mostapha El Kabir all showing glimpses of what they are capable of. In midfield Ricardo Faty produced a Man of the Match performance and showed why he will be a key player.

The areas of concern for Ankaragucu will be the likes of Ilhan Parlak and Arif not having the required quality to start every week at this level. Ilhan done a lot of running without anything of note on the ball. Arif played well but we need someone in the middle who is more creative. Hopefully Putsila can be that man, but he seems to be struggling with injury at the moment.

Alanyaspor were unlucky to lose at Sivasspor at the weekend after a narrow 1-0 defeat. They were the better side for large parts of the match and twice hit the woodwork. With the home advantage behind them they will be the favourites going into this one but Ankaragucu are more than capable of taking something from the match.

Its the first time the two sides will have ever met in the top flight of Turkish football, and the first time they have played against each other in over 3 years when Alanyaspor knocked Ankaragucu out of the Playoffs when both sides were in Lig 2. They have both come a long way since then and will be looking this season to cement their place in the Turkish Super Lig.

They key players for Alanyaspor will be Djalma, Emre Akbaba (If he is still there as Galatasaray want to sign him) and Efecan Karaca. Junior Fernandes is out injured and they also have former Ankaragucu duo Kaan Kanak and Hasan Ayaroglu in their squad.

The game kicks off at 21:45pm Turkish time and Jim will be taking care of the match report as i will be in Rome on holiday. For anyone wanting to watch the game with the Kanka Group please get in touch with Jim for meeting details.
By Nady - August 15, 2018