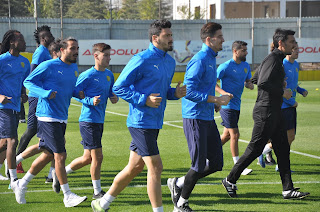 Ankaragucu host Kayserispor on Sunday afternoon at Yenikent stadium looking to make it 3 wins on a row in the Turkish Super Lig and move into the top 5. That we are even mentioning Ankaragucu being in the top half of the table is a true credit to manager Ismail Kartal who has the smallest budget in the Super Lig and half of the squad played for the club in Lig 1 last season.

After a stunning 3-1 victory at Fenerbahce last weekend, Ankaragucu will be hoping to maintain that form but know they face a different kind of test this weekend. Both sides won in the Turkish Cup during the week, Ankaragucu winning 1-0 at home against Erbaaspor, while Kayserispor thumped Pazarspor 6-1.

Kayserispor sit 12th in the table but these are the type of games that Ankaragucu have struggled against in the past such as the Antalyaspor match. The visitors have plenty of quality in their side such as Bernard Mensah, Tjaronn Chery, Deniz Turuc, Bilal Basacikoglu and former Ankaragucu favourite Umut Bulut who is their main goalscoring threat. Rajko Rotman is the steel in the middle of the park who breaks up play and allows the others to break forward.

Similar to Ankaragucu, Kayserispor have struggled at times to find the back of the net this season having scored only 9 goals in 10 games. A good 2-0 win against Sivasspor last weekend will give them confidence that they can come to the Capital and cause an upset.

Ismail Kartal will likely go with the same team that won last weekend at Fenerbahce. Youness Mokhtar and Alessio Cerci both played midweek and will likely take their place on the bench. Kubilay gives the team a new dimension up front with his size and physical presence. With creative players such as El Kabir, Thievy Bifouma and Kenan Ozer behind him he will have plenty of support in attack. Ricardo Faty and Djedje will be the two workers in midfield that allow the others to go and attack.

It will be an emotional return to Ankara for former forward Darius Vassell who is taking in the game and will be a guest of the club. Despite having an unsettled time a the club due to issues off field with the former management, he still holds the club close to his heart and the feeling is mutual with the fans. We hope that he enjoys his stay in Ankara and the team gives him 3 points on his return.
By Nady - November 02, 2018